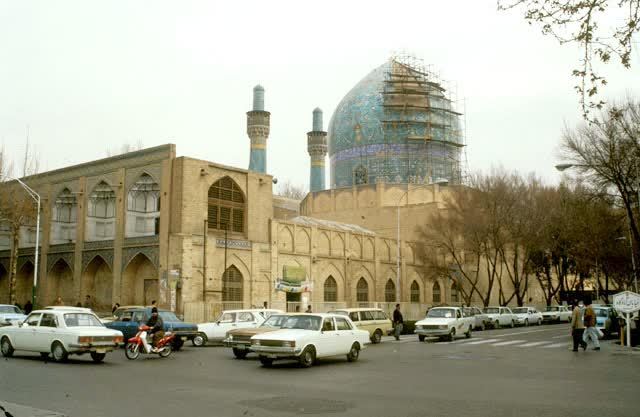 Share
Developed over the sixteenth and seventeenth centuries under Safavid rule, the Palace Complex at Isfahan consists of many buildings scattered throughout a lush garden which, in its initial form, covered an area measuring three miles in circumference. Built as part of a larger building campaign initiated by Shah Abbas I (1587-1629), the new palace at the Naqsh-i Jahan Gardens, to the southwest of the walled city, replaced the old imperial palace at Maidan-i Harun Vilayat.

The Naqsh-i Jahan Gardens were already in existence when Shah Abbas I ordered construction of a new central square, Maidan-i Naqsh-i Jahan, in 1602. Buyid rulers established the garden as a retreat for nobles in the tenth century and Seljuk emperors built their palaces there a century later. Shah Isma'il, who founded the Safavid Dynasty in 1501, built a pavilion in the gardens, which was mostly unused until the reign of Shah Abbas I. Having built a new square and a new avenue -- the Chahar Bagh -- to the east and west of the Naqsh-i Jahan Gardens, Shah Abbas I began construction of palatial structures at this central location between the new and the old city. The western arcade of the Maidan became the eastern wall of the imperial palace grounds, along which he established the main gate, Ali Qapu, at the former location of the garden entrance.

Rather than being articulated as a single entity within the Naqsh-i Jahan gardens, the structures of the Safavid palace were clustered according to their function with each cluster within its own individual garden. Only Ali Qapu, Chihil Sutun, and Hasht Behesht Palace have remained from the palace. None of the other structures including Talar Tavila, the harem quarters, the imperial stables, or the artisanal workshops and support structures have survived to our day.

During the reign of Shah Abbas I, Ali Qapu, or the Sublime Gate became an important urban and imperial marker of Isfahan. First built as a gate, it was expanded in 1602 and 1619 to include the main royal residence of the imperial palace complex. Shah Abbas I often sat at the double-height colonnaded loggia above the heavy masonry base of the gate to observe proceedings and ceremonies taking place in the Maidan. The Ali Qapu also housed the reception rooms for foreign ambassadors and palace guests.

Talar Tavila, or Stable Hall, was located south of Ali Qapu, before the harem cluster. It was built during the reign of Shah Safi I (1629-1642), successor to Abbas I, reportedly to celebrate the New Year of 1637. This hall, built in the middle of a stable later became the main audience hall where Shah Safi received his guests and headed celebrations.

Located slightly north of the Ali Qapu, the Chihil Sutun is aligned east-west along the maidan wall. Its name translates as forty, or, many pillars, which is explained by some as the total number of columns seen when its twenty pillars are doubled in its reflective pool. Built in 1646-48 by Shah Abbas II (1642-66), Chihil Sutun replaced Talar Tavila as the primary audience hall. It stands as rebuilt after a 1706 fire by Shah Husain (1694-1722).

The Hasht Behesht, or, Eight Paradises Palace, is located alongside the Chahar Bagh Avenue, north of the Madrasa-e Shah. It was built by Shah Sulaiman in 1669-70. Its plan, executed earlier, is a rectangle with chamfered corners enclosing four rooms at the corners of a domed central hall, with a water basin at its center. Iwans occupy the center of each façade. Raised ten feet above ground, the pavilion is set within its unique garden, which is bisected by an eleven-foot wide water channel.

The imperial residence of Shah Abbas I also included Abbasabad, a pavilion and garden retreat located at the southern tip of the Chahar Bagh Avenue. Between 1659 and 1660 Shah Abbas II built his own garden retreat called Sa'adatabad saddling the river Zayanda Rud between Rivulet and Hasanabad bridges. Finally, Shah Husain built the Farahabad gardens west of Abbasabad in 1700, which were destroyed soon after in the Afghan invasion of 1725.

In 1977, Ali Qapu, Chihil Sutun, and Hasht Behesht were restored by the Instituto Italiano del il Medio ed Estremo Oriente (ISMEO) and the National Organization for the Conservation of Historical Monuments in Iran (NOCHMI). The restoration was recognized with the Aga Khan Award for Architecture in 1980. The palace and its neighboring historical monuments are incorporated into an archaeological park.

Ardalan, Nader and Laleh Bakhtiar. The Sense of Unity: The Sufi Tradition in Persian Architecture. Chicago and London: The University of Chicago Press, 1973. 96-127. 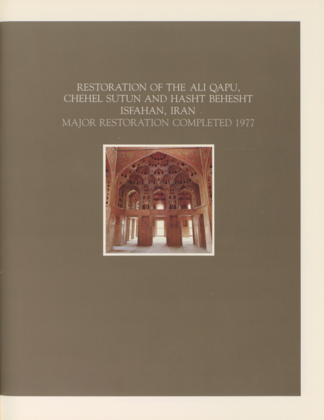