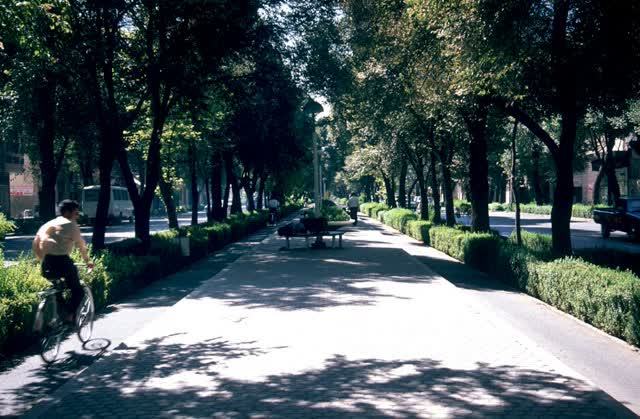 Share
Chahar Bagh is the main boulevard of Isfahan, Iran. It was built as a part of a larger urban project undertaken between 1596 and 1597 by the Safavid Shah Abbas I. Its name, literally translated as "four gardens", refers to a popular garden typology consisting of four plots divided by waterways or paths forming a cruciform plan.

The public boulevard is 1,650 meters long and consists of four quadpartite gardens arranged along a north-south axis that slopes towards the south. Each quadpartite unit is composed of two square and two rectangular plots separated by pathways and is located slightly lower than the preceding unit. Together, they are experienced as a single boulevard with a central promenade flanked by axial garden plots. The gardens have since been converted into roadways, with plane trees lining either side. Running along the center of the promenade was a water channel with cascades; the promenade now only features circular flower beds and light posts.

The Chahar Bagh is located approximately 535 meters to the west of the main city square (maidan), and urbanistically serves as the main north-south artery of the city from which all other east-west avenues spring. Between the Chahar Bagh and the Maidan are the royal gardens. Overlooking the northern end of the boulevard is a small glass pavilion. The boulevard continues on the other side of the Zayandeh river, crossed by the Allahverdi Khan Bridge (b. 1602), where the royal gardens of Hazar Jarib are located. Further south, the Chahar Bagh connects Isfahan with Julfa, an Armenian Colony settled during the reign of Shah Abbas.

The Chahar Bagh continues to be an important social gathering place of Isfahan. At its inception, it was lined by palaces and residences of noblemen that faced on to it with open arcades giving views to their private gardens. In 1706-1714, the large madrasa complex of Madar-e Shah was built along the eastern side of the boulevard. Today, it is lined with shops, hotels, and some remaining palaces.