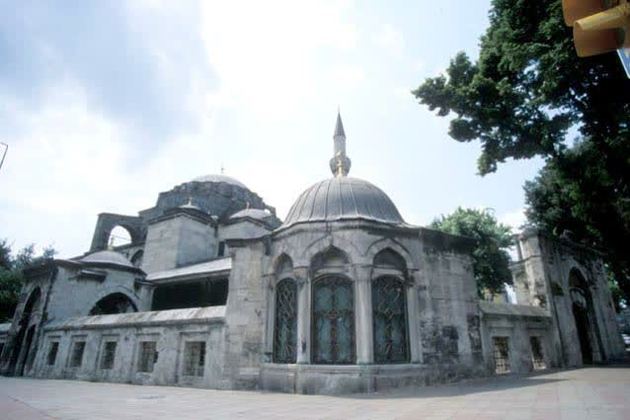 Share
Kılıç Ali Paşa Külliyesi is a mosque complex located across from the Ottoman canon foundry (Tophane) near Karaköy, Istanbul. Chosen for its proximity to the Tophane Pier along the Bosphorus, the site is now located further inland due to infills along the shoreline. The complex is named after its patron, who was the grand admiral of the Ottoman Navy. Sinan, the chief architect of the Ottoman court, designed the mosque toward the end of his career. Inscriptions date the completion of the complex to 1580-1581/988 AH. The larger complex includes a mosque, a madrasa, public baths, a water dispenser (sabil), and a cemetery including the founder's tomb.
Layout

The entire complex is aligned with qibla (east of south). The mosque and cemetery sit in an irregular walled enclosure, bounded on the north by a broad avenue (today's Kameralti Caddesi) and on the east by a side street running northwest to southeast toward the Bosphorus. At the intersection of these two aforementioned streets is a domed sabil, marking the northeastern corner of the enclosure. The main gate to the enclosure is located just south of the sabil, on the east wall. Within the enclosure, the mosque and its octagonal ablutions fountain occupy the northern half of the site. South of the mosque, behind the qibla wall, is an open green space that contains the mausoleum. The madrasa and baths lie to the west of the enclosure: the madrasa adjoining its southwestern corner and the baths lying just north of this, adjacent to the west side of the mosque.
The sabil
The complex's water dispenser is situated on its northeastern corner, facing the public square on which the Tophane Fountain would be built two centuries later. It is a domed square building, three of the walls being on the interior of the enclosure and the fourth, exposed to the exterior, takes the form of a projecting triple arched window.
The mosque
The mosque consists of a large rectangular block with a short, apse-like extension on its south side. This is preceded by a large, double portico that wraps around its front. The space in front of the mosque is a paved ablutions area. Spigots line the enclosure wall opposite the portico, and additional washing areas are located around the dodecagonal ablution fountain (sadirvan) that occupies the center of the area, protected by a domed kiosk carried on eight pillars. The forecourt is largely shaded with the long eaves of the mosque portico, ablution arcade and the ablution fountain.
The double portico has a five bay inner section that fronts the prayer hall which is enveloped on three sides by an outer section with lower columns. The inner section features muqarnas capitals and is covered with domes, while the outer section has a shed roof and diamond-cut capitals. Iron screens placed between the outer columns separate the double portico from the forecourt, limiting entry to a carved marble doorway inside the central bay. The tall mosque portal is centered on the portico façade and crowned by an inscription plaque and a large triangular panel with a mirrored inscription highlighted in gold. Without the portico, the mosque measures thirty one and a half meters by twenty six meters on the exterior.
Inside, the prayer hall is divided into a central nave and two side aisles, much like Byzantine church design. The tall nave is covered by a central dome measuring thirteen meters in diameter, braced by two semi domes of the same radius to the northwest and southeast. Like at the Hagia Sophia, the lateral thrust of the dome is asymmetrically countered with grand arches in the other two directions, requiring the placement of heavy flying buttresses on the exterior. Double-story galleries flank the nave on all sides except for qibla where the shallow mihrab apse projects into the cemetery behind the mosque, covered with a small semi-dome. The vertical loads of the dome are transferred via pendentives onto four massive piers built into the gallery arcades. The nave is illuminated from the top with rings of windows pierced into the base of the dome and the semi-domes, and from clerestory windows inside the tympana of the dome arches. Two tiers of casements bring light and air into the galleries; both tiers are topped by arched windows featuring colored glass set in plaster. A continuous stone cornice envelops the interior at the springing of the dome arches, adding stability to the structure as well as creating a catwalk for maintenance.
On the qibla wall, the rectangular mihrab apse is covered entirely with Iznik tiles featuring floral designs and inscriptions. Four plaster windows inside the apse and two others set high on the qibla wall feature intricate colored glass compositions containing floral arabesques and inscriptions. The marble mihrab is adorned simply with a muqarnas hood, while the sides of the marble minbar are carved with arabesques painted in gold. The muezzin's platform (müezzin mahfılı) is located across the minbar to the right of the entrance, and is carried over eight marble columns. Interior walls of the galleries and all vaulted surfaces are covered with white plaster and painted in sections with floral arabesques. Inscription medallions adorn the apex of tall dome and the pendentives of the central dome. The cut-stone construction of the gallery arcades and the qibla wall are left exposed.
The single minaret of the mosque is attached to the west corner of the prayer hall. Its steps are accessed from one of two symmetrical stairways at either end of the northwest arcade that lead up to the gallery level. All domes and roofs, including the conical crown of the minaret, are covered with lead panels on the exterior.
The mausoleum:

The octagonal stone tomb of the founder is located in the cemetery behind the qibla wall of the mosque. Its dome is carried on four arches that rest on a thick wall to the northeast and two free-standing columns to the southeast. Its portal is set into the northeast wall, topped by the foundation plaque.
The madrasa:
The madrasa is located to the south of the mosque. It is square in plan and measures about twenty-five meters per side. Its fountain court is surrounded by an arcade with eleven domed bays that give access to eighteen student cells. The large domed classroom iwan projects beyond the northeast wing of the madrasa and faces the cemetery like the mosque apse.
Public baths:
The public baths (hamam) of the complex is located outside the precinct walls, to the southwest of the mosque and was completed by 1583. Measuring eighteen meters by thirty one and a half meters, the baths consist of a hot-room preceded by a dressing room of equal size to its northwest. The hexagonal hall of the hot-room is flanked by seven private cells, five of which have domes. The central spaces of the hot-room and the dressing room are covered by domes pierced with lights; the larger dome of the dressing room is fourteen meters in diameter. The baths are no longer in function and are in need of restoration.
Sources:
Necipoglu, Gülru. The Age of Sinan: Architectural Culture in the Ottoman Empire, 428-438. London: Reaktion Books, 2005.
Eyice, Semavi. "Kiliç Ali Pasa Külliyesi". In Dünden Bugüne Istanbul Ansiklopedisi, 557-558. Istanbul: Tarih Vakfi, 1994.
Kuran, Aptullah. Mimar Sinan, 208-215. Istanbul: Hürriyet Vakif Yayinlari, 1986.
Sözen, Metin. Sinan: Architect of Ages, 316-325. Istanbul: Turkish Ministry of Culture and Tourism, 1988. 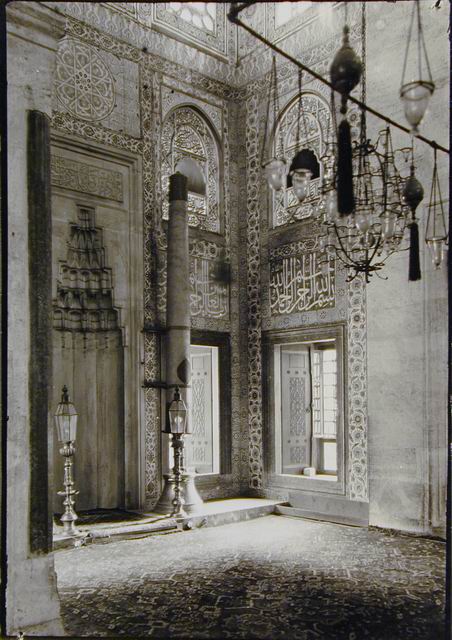