The Mimar Sinan collection highlights the famous architect's work and features 226 photographs and 95 architectural drawings from Professor Gülru Necipoglu's (Aga Khan Professor, Harvard University) 2005 book entitled The Age of Sinan: Architectural Culture in the Ottoman Empire, 1539-1588 [London: Reaktion Books]. Mimar Koca Sinan (d. 1588) was appointed chief royal architect to the Ottoman court by Sultan Süleyman I in 1539. During his fifty-year career he designed and constructed hundreds of buildings, including mosques, palaces, tombs, schools, madrasas, hospitals, hospices, caravanserais, aqueducts and bridges. The most celebrated of all Ottoman architects, Sinan is renowned in particular for his mosques, where his inventive experimentation with centralized domed spaces -- often compared with parallel developments in Renaissance Italy -- produced monuments in which the central dome appears weightless and the interior surfaces are bathed in light. His distinctive architectural idiom left its imprint on the Ottoman capital of Istanbul, and across the vast empire that extended from the Danube to the Tigris. 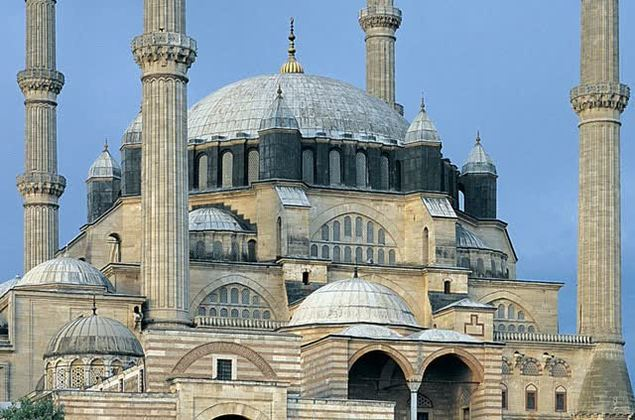