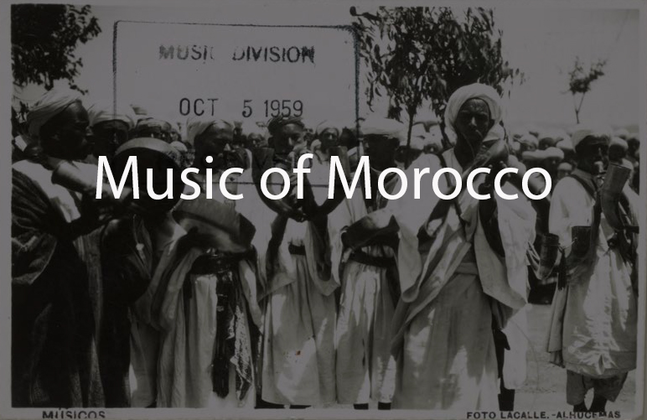 In 1959 the American writer and composer Paul Bowles, who by then had already taken up residence in Tangier, Morocco, received a grant from the Rockefeller Foundation to document the musical heritage or Morocco for the Archive of Folk Culture of the Library of Congress.  Bowles traversed the country in a VW Beetle, with an Ampex reel to reel recorder and an assistant, to record "approximately 60 hours of traditional folk, art, and popular music. Bowles collected in 23 villages, towns, and cities along the Mediterranean and Atlantic coasts, from Goulimine in the Sahara to Segangan in the Rif country, and inland through the Middle and Grand Atlas ranges to Zagora in the Anti-Atlas."1 Additional recordings were made between 1960-1962.  Only the southeastern part of Morocco was left out of the project due to the ongoing war in Algeria. A selection of the recordings was released commercially on vinyl in 1972.2 An expanded edition of that set, remastered and more extensively documented, was released in 2016.3

In 2010 the Tangier American Legation Institute for Moroccan Studies (TALIM) commissioned the digitization of the recordings, with the support of funds from the Public Affairs Office of the U.S. Embassy in Rabat, the Wilaya of Tangier, and the Moroccan Ministry of Culture.  The Aga Khan Documentation Center at MIT has agreed to make the recordings and the corresponding documentation available in this collection. Unless otherwise noted, all information presented in the descriptions and in the texts of the videos comes from the information provided by Paul Bowles, or from supplementary materials from the Paul Bowles Moroccan Music Collection of the American Folklife Center. The collection uses the names and spellings used by Bowles for people, places, and styles, but associates them with site records including contemporary and standardized names.

The cataloging of each recording  and its supplementary materials takes full advantage of the capabilities of Archnet to situate the music within the context from which it originates or was recorded. Videos and notes are grouped into sub-collections based on the place where they were recorded. Links associated with each video connect each recording to the relevant notes, images and other material from the archive,  as well as additional related material provided courtesy of the American Folklife Center, the Harvard Fine Arts Library, TALIM, and AKDC@MIT.

For the sake of internal consistency within the collection, items are cataloged using only the information provided by Paul Bowles in his notes and documentation.  The spelling of names, instruments, tribes, and places has not been updated, corrected, or standardized.  However, where appropriate, records have been linked to place name and other authorities that follow Archnet's transliteration standards.

This is a project that is under development.  Items will be added as they are processed and cataloged.  We thank you for your patience, and welcome comments or suggestions.

3. Bowles, Paul, Lee Ranaldo, and Philip Daniel Schuyler. Music of Morocco: from the Library of Congress. 2016.