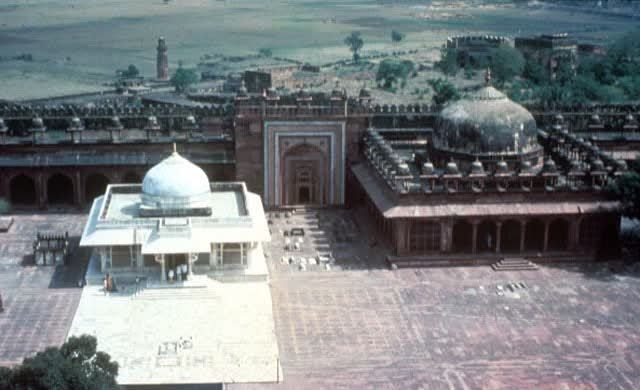 Share
The tomb of Salim Chishti is located within the Friday Mosque complex at Fatehpur Sikri, which is located at the southern end of the Fatehpur Sikri palace complex. It occupies a prominent position within the mosque courtyard, facing its main entrance, the Buland Darwaza. The original sepulchre was built by Akbar between 1571 and 1580 to honor the Sufi saint Salim Chishti, the descendent of Khwaja Moinuddin Chishti, whose tomb is in Ajmer. Legend has it that Akbar, who lacked an heir, sought assistance from Salim Chisti. The son then born to Akbar was named Salim, after the saint, and later became known as Jahangir.

Today, the tomb is a white marble structure raised on a plinth. Its ornamentation and construction are largely inspired by Gujarati tomb architecture, and include Hindu, Jain and Islamic elements. The original building commissioned by Akbar is believed to have been a smaller, red sandstone structure, consisting of today's inner tomb chamber. Jahangir later introduced the verandah, the southern porch and the extensive marble cladding.
On the south, an ablution tank and a raised white marble plinth precede an entrance porch notable for its (nonstructural) serpentine brackets which traverse between the columns and the porch roof. The building, comprising the tomb chamber and a circumambulatory verandah, is square in plan and measures 14.63 meters per side. It is clad completely in white makrana marble. The inner tomb chamber, which contains the cenotaph of the saint, is also square in plan and measures 4.88 meters per side.

The verandah features finely carved stone jali panels between its columns and pilasters. The jali panels take the shape of a rectangular frame with an inset ogee arch. At the corners of the verandah, three small vertical jali panels form side lights flanking the arch on either side; a horizontal band at the springline of the arch divides it into two sections, and its tymphanum above creates a third. Each panel is filled with intricate geometric patterns; the fine detailing gives the marble the appearance of ivory. On the interior, the opaque surfaces of the verandah contain inlaid Arabic inscriptions in black marble from the Quran and the Hadith.

A very broad chajja (eave) encircling the building's elevations, including the porch, is supported on S-shaped Gujarati-type struts, with the space between the curves of the ‘S’ filled with intricate jali work in geometrical and floral designs. These nonstructural struts are further articulated with a molded pendant at the lower end and a half chakra (a circular medallion) at the crown. Similar serpentine struts can also be found on the small Stonecutter’s Mosque. They are entirely decorative; the load from the chajja is transferred to a system of bracket supports that project from the capitals of the columns. The roof over the verandah is corbelled ( a "lantern" roof), and the tomb chamber is surmounted by a single central marble hemispherical dome supported on squinches within and crowned by a modest lotus finial without.

The cenotaph is located in the centre of the inner tomb chamber and is covered by a canopy made of ebony and inlaid with mother of pearl. The interior of the tomb is decorated profusely with paintings, covering almost all surfaces from the skirting to the dome. Created on plaster applied to the stone walls, these paintings contain a combination of organic and geometric motifs, a style which would date them to the reign of Shah Jahan (reg. 1628-1657).

The materials of the tomb indicate that its current form is the product of a renovation by Jahangir, one undertaken approximately 20 years after Akbar built the original structure. The rich marble veneer of the verandah and the external surfaces do not belong to Akbar’s period, when marble was used quite sparingly in the form of inlay and ornament, and most buildings were clad in red sandstone; examples include Humayun’s Tomb in Delhi and the Jahangiri Mahal in Agra, both built by Akbar. In addition, the burial chamber has a brick skeleton, with stone used only in the skirting; this forms the basis of the conjecture that the original site was limited to the internal tomb chamber, which would have been clad in red sandstone.

Jahangir’s memoirs include references to additions made to the Salim Chisti tomb during his reign which were carried out under the supervision of Qutb Al Din Kukaltash Kuban, the grandson of Salim Chisti. In 1605-1607, the verandah and porch were added along with their corbelled roof and the jali screens, and the external surfaces were clad with marble. It is probable that the continuous chajja and serpentine struts existed in the original structure, but in red sand stone, as present in the Stonecutter’s Mosque in the Fatehpur Sikri complex. The entire composition of chajja and struts would have been redone in marble and added to the new exterior of the tomb during Jahangir's renovation.

Decorative details in the structure include the repeating patterns of straight lines, six-sided stars and the Hindu swastika found within the jali panels of the verandah. The padma (lotus) motif is found in the spandrels of the arches, and chakra motifs are found on the struts, along with more traditional Islamic motifs and Arabic inscriptions.

The tomb of Saint Salim Chishti continues to be an important pilgrimage destination for Hindus and Muslims alike, particularly for would-be mothers.