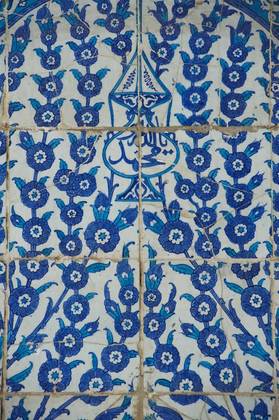 Amir Aqsunqur Mosque, known as the Blue Mosque, is aligned on Darb al-Ahmar Street leading to the Citadel. The mosque was built in 1347 by Amir Aqsunqur, a son-in-law of Sultan al-Nasir Muhammad. The building integrates the pre-existing mausoleum of Kujuk aligned on Bab al-Wazeer Street between the Khayer Bek complex and the Umm al-Sultan Sha’ban mosque. Later in 1652, the Ottoman Amir Ibrahim Agha Mustafazan initiated a restoration campaign of the mosque that had fallen into decay and redecorated the sanctuary with the Iznik tiles giving the mosque its modern name, the Blue Mosque. Ibrahim Agha Mustafazan is buried in a mausoleum adjacent to the mosque's courtyard. The Aqsunqur Mosque is representative of the courtyard-type mosques but is subject to a well harmonized conglomerate of three different styles marking the presence of three significant patrons, Sultan Kujuk through its mausoleum along Bab al-Wazir, Amir Aqsunqur who developed the courtyard mosque and had its mausoleum built on the South and Ibrahim Agha Mustafazan who decorated the praying space with Iznik tiling and also had his mausoleum built in the same technique.

The conservation project, co-funded by the World Monuments Fund and the Aga Khan Trust for Culture, was started in June 2009 and completed at the end of 2012. As part of Al-Darb al-Ahmar urban regeneration project, the restoration was managed and coordinated by the Aga Khan Cultural Services-Egypt, the local agency of the Aga Khan Trust for Culture in coordination with the Supreme Council of Antiquities.
The programme, executed by a team of 60 to 80 craftsmen and conservators, included the removal of temporary structural supports and the implantation of stabilization measures, the conservation of delicate and rotten marble panels and Iznik ceramic tiles and large scale roofing and façade conservation. The minaret was restored from June 2009 to May 2010. Reconstructed in 1925, it consists of three stories. The first story, which rises from the short square base, is circular and plain, the second circular and ribbed, and the third is open, octagonal, and carries a bulb. It circular shaft is rare among Mamluk minarets. To conserve the minaret, cleaning activities and conservation have been finalized on both the exterior and interior.
The roofing restoration and rehabilitation activities involved full dismantling of existing conditions up to the structural systems and complete re-instalment of boarding, water insulation and finish coats.
The Mosque’s interior restoration required activities of architectural and ornamental conservation, such as stone replacement, brick masonry repairs and plastering, Iznik tiling and marble panels cleaning.
Sources:
Behrens-Abouseif, Doris. “Islamic Architecture in Cairo.” Leiden: E. J. Brill, 1989.
Aga Khan Trust for Culture, Historic Cities Programme, “Conservation Project of the Aqsunqur Mosque (Blue Mosque): A project funded by the Word Monuments Fund & the Aga Khan Trust for Culture. Final Report.” December 2012. 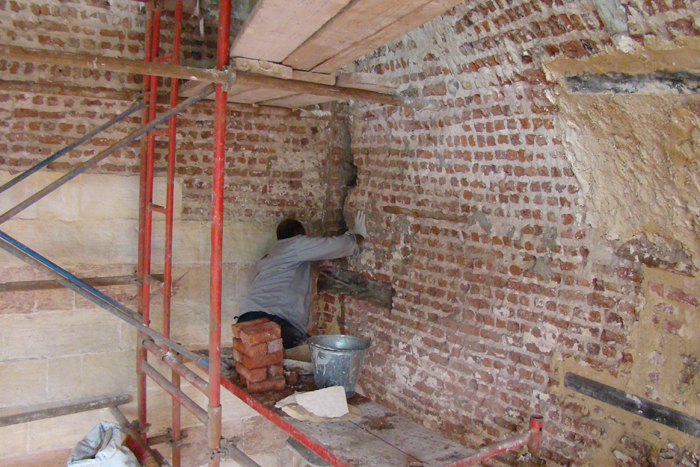