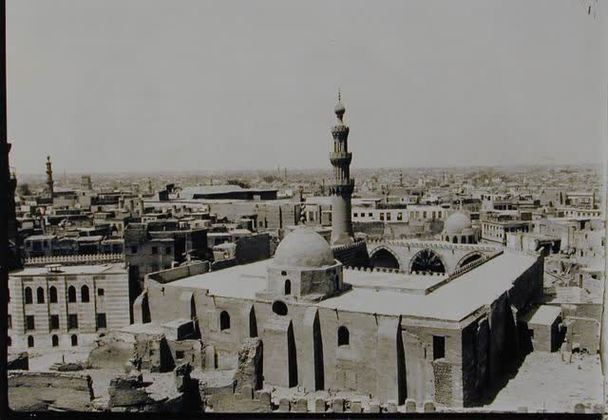 Share
The hypostyle mosque of Amir Aqsunqur was built by the amir, a son-in-law of al-Nasir Muhammad, in 1346-7. Part of the foundation is a mausoleum located on the street side and containing the graves of Sultan 'Ala' al-Din Kuchuk (r. 1341-2), son of al-Nasir Muhammad, and several of his brothers. This mausoleum, which predates the mosque, is one of the very few Cairene mausolea that follow the street alignment instead of the qibla. As a member of the house of Qalawun through marriage, Amir Aqsunqur incorporated this mausoleum into the structure of his mosque, which accounts for the irregularity of the ground plan of the complex. He also added another mausoleum in which he and his son were interred.

A curious feature of the original scheme of this mosque is its employment of piers sustaining cross-vaults. This is a departure from the standard structural scheme for the interior of hypostyle mosques from the Bahri period, which consists of arcades formed by marble columns carrying arches which support a flat wooden ceiling. However, Aqsunqur, who is reported by al-Maqrizi to have himself been the supervisor on the construction site, had been governor of Tripoli, Syria, the great mosque of which (1294-1314) follows a hypostyle scheme with cross vaults on piers. In addition to these vaults on piers, the mosque has arcades on columns supporting a flat wooden ceiling, probably a later addition.

The brick one-bay dome above the mihrab is carried on four plain squinches built of brick. Similar squinches are also used to carry the brick dome over the mausoleum of Kuchuk, but with a pendentive underneath each squinch. By the time this foundation was built, the use of plain squinches in the transitional zones of domes instead of muqarnas pendentives or squinches was old-fashioned. The blue Iznik tiles on the qibla wall were installed in 1652-64 by Ibrahim Agha, who seized and redecorated the mosque. They were imported either from Istanbul or from Damascus.

Instead of the usual position at the portal, the minaret is strategically located at the southern corner of the facade which projects into Bab al-Wazir Street. This projection cleverly provides the minaret with a complete visual domination of the southern part of the street. The minaret has features that are rare in Cairene minarets. The present minaret, which was restored at the beginning of the 20th c., has three stories. The first story, which rises from the short square base, is circular and plain, the second circular and ribbed, and the third is open, octagonal, and carries a bulb. Due to its visual domination of the street, this minaret was the subject of many 19th c. illustrations, which show that it originally had four stories instead of the standard three. The fourth story, which surmounted the present octagonal one, was the standard circular pavilion consisting of eight slender columns supporting a bulb. The original minaret of Aqsunqur and the rectangular minaret of al-Ghuri are the only documented Cairene examples of four-story minarets. The minaret of Aqsunqur is one of the few Cairene minarets which are circular in cross-section from the base to the top, and it also displays the earliest dated example of concave chamfering in the transitional zone between the square base and the circular shaft. Unlike prismatic triangles, undulating moldings, and straight chamfering, this transitional feature was unique to minarets and was never employed on the bases of domes.