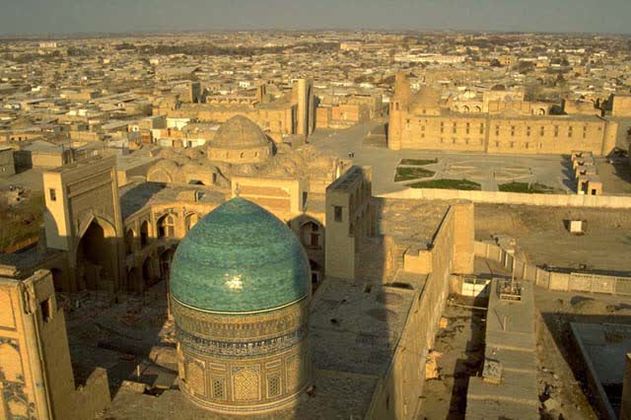 Share
Recipient of the Aga Khan Award for Architecture in 1995.
The old city of Bukhara was founded 2,500 years ago. Within its ancient city walls and gates are 500 standing monuments: they include 24 madrasas, 48 mosques, 14 caravanserais, 9 mausoleums, 4 trading domes, the Ark citadel, and many hammams, old houses, and canals. The restoration programme began in the late 1960's under the USSR, and has been continued by Uzbekistan since its independence in 1990. The primary aim is to conserve the major monuments and landmarks in the centre of the old city, and to re-integrate them into the life of the bordering districts. Because most of the upgraded mosques, madrasas, mausoleums, and other monumental structures are no longer used as such, a new function was found for each. Some madrasas, for example, have been turned into craft centres, studios, and galleries. One has become a restoration institute where future restorers are trained. Other structures have had their old functions renewed. A caravanserai is once again a silk and cloth warehouse, and trading domes are renewed as active suqs. Among the great landmarks restored are the Samanid Mausoleum, the Mir-i Arab Madrasa, and the Kalyan Minaret. To open up the old centre, thereby allowing the monuments to be better seen, mediocre buildings of the 1950's were removed. Utilities have been upgraded, and the streets paved. Old Bukhara, no longer a derelict slum, is now a viable prosperous city. The jury believes that "the restoration of Bukhara sends a very strong message to the rest of the Islamic world of the need to restore and re-integrate old cities into new ways of life."