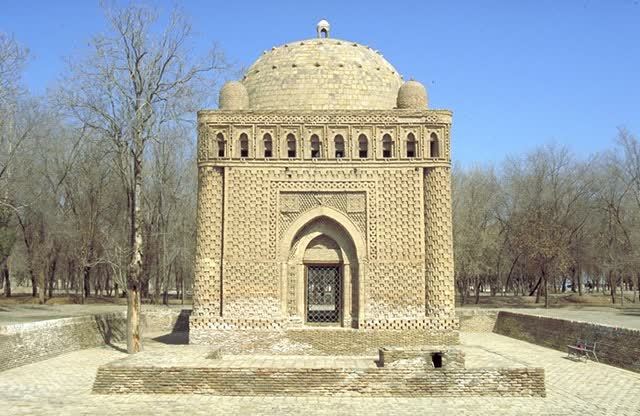 Share
Popularly known as the Tomb of the Samanid, this early mausoleum was erected by the Samanid ruler sometime before 943/332 AH. An existing waqf document indicates that it was possibly built for his father. Although three bodies lie within, a wooden plaque identifies only Ismail's grandson, Nasr ibn Ahmad ibn Ismail or as-Said Nasr II (d. 943). Ostensibly the family crypt of the first local Muslim dynasty, it is possible that, consistent with popular nomenclature, the structure does indeed contain the grave of Ismail himself.

The baked brick structure describes a simple form: a slightly tapered cube capped by a hemispherical dome that is inset from the exterior face of the cube. The exterior surface decoration of highly articulated brickwork provides visual interest. Departing from customary stucco decoration, the use of allover decorative brickwork represents an important innovation. Each façade is identical, joining the next with semi-attached circular columns. Centered within each façade is an arched opening framed by bricks laid in basket weave, the spandrels composed of diagonally set end brick. A frieze of small arches on columns encircles the top of the cube forming a miniature arcade, the corners are punctuated with small domical forms that sit above the cube.

The exterior arcade frieze repeats on the interior as an internal gallery. Utilizing corner arches to facilitate the interior transition from the square plan to the dome constitutes another important innovation.

Hill, D. Islamic Architecture and Its Decoration, 49. Chicago: The University of Chicago Press, 1964.