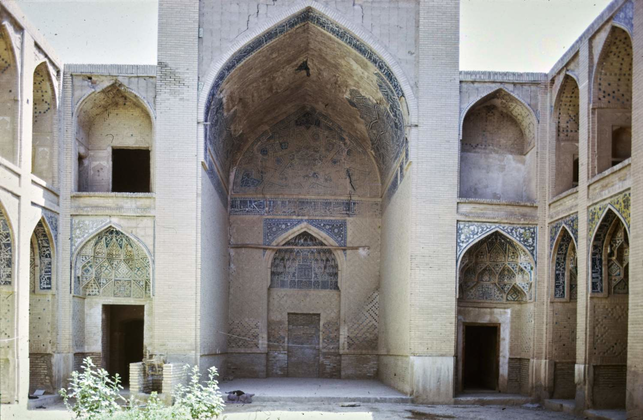 Share
The Madrasa-i Imami is a theological college or madrasa in the Jubara quarter of Isfahan and is significant as one of the earliest Iranian madrasas still in existence. Dated to 1325, this baked brick structure is built around a courtyard in typical Seljuq style, with four iwans or vaulted halls in the centre of each elevation. It adjoins the more famous tomb of a respected theologian named Baba Qasim, erected by Abu al-Hasan al Talut al Damghani in 1340-41. This tomb attributed with miraculous powers was lost in the nineteenth century and now has been rebuilt to be associated again with the madrasa.

The two-storied madrasa measures 92 by 72 meters and each side of the internal court consists of cells for student accommodation, flanking a central common space for prayers and study. This functional arrangement is expressed in the four nearly identical courtyard facades as series of continuous niches that engulf a central iwan. The archetypal nature of the building however recedes as one notices significant modifications. The iwans, interrupt the flat roofline but are not the dominant visual feature, instead the mihrabs (or niches) form the elevation's principal accent.

Decorative mosaic tile-work marks the earliest phase of the transformation from purely geometrical design to intricate floral patterns, which was later perfected under the Timurids in the fifteenth century. The central mihrab or niche marking the direction of prayer in the madrasa is renowned worldwide as a ceramic mosaic masterpiece. Assembled through a painstaking process of cutting each piece of tile, this turquoise blue artwork is made of glazed and painted ceramic on plaster, with Kufic inscriptions around the frame of the niche.

The Madrasa-i Imami is a functioning madrasa and was not adopted till recently by the Iranian Department of Antiquities, thus suffering damage by neglect to its brick and tile work. Recent restorations, especially to the decorative mosaic panels with traditional craftsmanship have been successful. The structure marks an important stage in the evolution of architecture of residential theological colleges as contrasted to institutions visited by students and scholars.