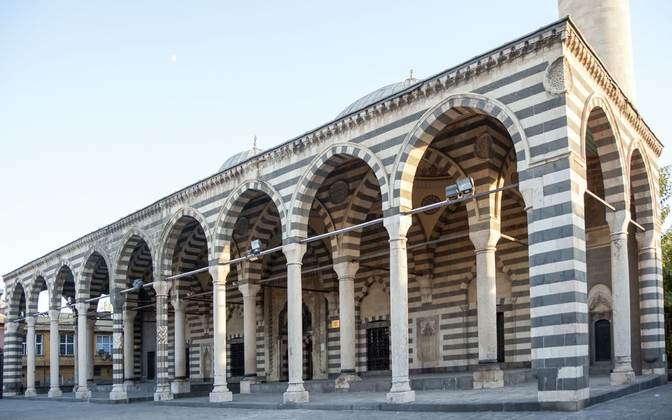 Behram Paşa Camii is an Ottoman-period mosque located in the southwestern quadrant of the old walled city of Diyarbakır. The mosque is named for Halhallı Behram Paşa (d. 1585), the governor-general (beglerbegi) of Diyar Bakir Province who commissioned the mosque. Mimar Sinan, chief architect under Ottoman sultan Süleyman the Magnificent, was responsible for the mosque’s design. According to an inscription over the main entrance, construction ended in 1572-1573/980 AH.

The mosque is an ashlar-masonry structure. It is situated on a large paved square at whose center is an octagonal fountain covered by a pyramidal roof. The main facade (north side) of the mosque faces this square. The building itself consists of a prayer hall in the form of domed cube fronted by a double portico on its north side which opens onto the aforementioned square. Alternating black and white rows of stone slabs (ablaq) were used to construct the pointed arches of the portico as well as the façade of the prayer hall. A minaret rises from a base adjoining the southwestern corner of the portico.

The double portico consists of an inner portion made up of five domed bays immediately preceding the prayer hall façade and an outer portion that wraps around this inner part on three sides. The portal is located under the central bay and consists of a doorway framed by alternating black and white stone jambs and lintel. A muqarnas hood covers this and is in turn framed by a lobed archway and a vegetal frieze. Two windows set into trefoil arches frame the portal on each side of the facade.

The prayer hall is a large open space covered by a dome that rests on a circular drum. The transition from square base to circular drum is made with four large squinches with semi-domes. Two recessed cells flank the mihrab and, on the opposite end, the entrance portal. Three shallower alcoves are cut into the east and west walls of the hall, each with a small mihrab. All ten recessed spaces are lit by windows.

Tilework is used to decorate the dadoes throughout the prayer hall and lateral alcoves. The tiles are underglaze-painted in turquoise and blue with some red on a white ground. Only one pattern is used throughout: two types of  palmettes flanked by saz leaves. These tiles mimic the imperial production of the iznik kilns but are a product of local craftsmanship.

The mosque represents an excellent example of a provincial congregational mosque in the Ottoman imperial style at its height.