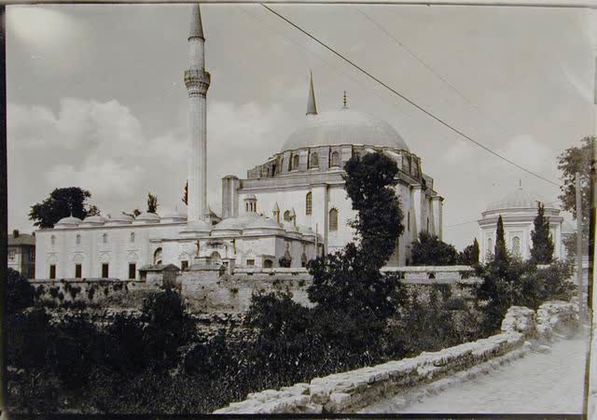 Share
Sultan Selim Külliyesi is a mosque complex in Istanbul. Kanuni Süleyman (r. 1520-1566/926-974 AH) commissioned the complex in memory of his father, Yavuz Selim (Selim I., r. 1512-1520/918-926 AH) at the very beginning of his reign, making it one of his earliest commissions. An inscription plaque on the mosque's portal states that the building was completed in 1522/929 AH. Primary sources mention that the complex included a mosque, mausoleum, madrasa (medrese), Qur'an school, public kitchens (imaret and darüzziyafe), and a hospital (darüşşifa). Only the mosque, hospices, Qur'an school and tombs remain. It is widely accepted that the complex is the work of chief architect Alaüddin, known as Acem Ali (Slave or Persian Ali).
Layout
The buildings occupy the fifth hill of the historic peninsula, a prominent site adjoining the fifth century open air cistern Aspar. The elevated terrain commands a view of the Golden Horn.
The Mosque and Hospices

The mosque is placed within a rectangular walled precinct aligned with qibla on a northwest-southeast axis. Three gates, located at the south corner (Türbe Kapısı), west corner (Çarsı Kapısı) and along the northwest wall, lead into the precinct. The mosque, with its cemetery, occupies the southeast end of the precinct and is composed of a single-domed prayer hall preceded by a large, arcaded courtyard and flanked by square hospice wings.
The mosque courtyard is entered from a main portal facing northwest, and two side portals. It is enveloped on three sides with an arcade of eighteen bays, continued with the six-bays of the prayer hall portico to the northwest. The bays of the arcade and portico are covered with domes, while the two bays adjoining the courtyard and prayer hall portals support lofty mirror vaults. An octagonal ablution fountain, covered with a domed canopy built by Murad IV (r. 1623-1640/1032-1049 AH), occupies the center of a courtyard, surrounded by four cypress trees. Grilled windows give views from the courtyard arcade onto the precinct; each window is adorned with a floral tile panel in its tympanum.
A muqarnas portal leads into the prayer hall, which measures twenty-four and a half meters per side -- two bays shorter than the width of the portico. It is capped at thirty-two and a half meters by a single dome that rests on pendentives between four grand arches embedded in the walls. The interior is lit by four casement windows on each wall, which are topped by arched windows that display colored glass arabesques. Windows pierced at the base of the shallow dome are separated by buttresses on the exterior.
The exposed stone interior is decorated simply with inscriptive medallions bearing the names of God, the Prophet and Caliphs. Muqarnas carvings adorn the hood of the marble mihrab on the qibla wall, while the marble minbar to its right is carved with arabesque motifs highlighted in red, black and gold. The marble muezzin's platform (müezzin mahfili) abuts the southwest wall and is raised over six square pillars. The large sultan's lodge, also of marble with eight precious columns, occupies the eastern corner of the prayer hall. It was constructed in the mid-sixteenth century, and is accessed only from the outside, with steps built into the northeast wall. Examples of period woodwork can be seen on doors, windowpanes and the ceiling below the sultan's lodge.
The hospice wings on either side of the prayer hall consist of nine domed bays that form a cross-shaped central hall and four corner rooms. The halls are entered from the prayer hall, or from the exterior. Two minarets with muqarnas balconies are attached to either end of the mosque portico where it meets the two hospice wings. The prayer hall, hospice and minarets were restored in 1930 and 1962, and most recently beginning in 2003.
Mausolea

Four royal tombs are located in the cemetery behind the mosque's qibla wall. Made of cut stone, the tombs have octagonal plans and are covered with domes. The larger tomb of Sultan Selim I is distinguished by a portico with a shed roof carried on four columns. Past the wooden doors inlaid with mother of pearl is an entry vestibule adorned with two large tile panels. Its interior was repainted based on the original decorative scheme. The tomb facing that of Selim I to the northeast holds the graves of the three sons of Kanuni Süleyman and two daughters of Selim I, and is known of the Tomb of Royal Princes (Sehzadeler Türbesi). Beyond it is a similar tomb that holds the grave Sultan Abdülmecid, among others members of the royal family. Only the lower walls remain of the tomb of Hafsa Sultan (wife of Selim I and mother of Kanuni Süleyman), which was damaged in the 1894 earthquake.
Qur'an school

The Qur'an school (sibyan mektebi) is located on the northwest corner of the precinct, adjoining the Bazaar Gate. It is single domed structure with a two-bay portico to its south. It has eight windows placed in two tiers on two walls. It was rebuilt after the 1918 fire and is currently used as a library.
The soup kitchen
The soup kitchen to the north of the precinct was replaced by a girl's school in 1917; it contained a kitchen and stables.