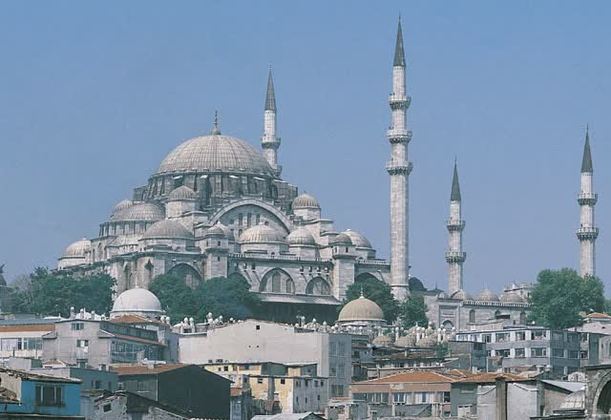 Süleymaniye Külliyesi is a multi-functional complex founded by Sultan Süleyman I in Istanbul. In terms of size and visual impact, the Süleymaniye represents the apex of Ottoman imperial architecture executed in the capital city.

An inscription plaque on site dates the foundation of the building to 1550/957 AH and its inauguration to 1557/964 AH, although other documents make clear that certain buildings in the complex were not finished until 1559/966 AH.1 The complex includes a mosque, the mausoleums of Sultan Süleyman I and his wife Haseki Hürrem Sultan, four madrasas dedicated to the four schools of Islamic law, one madrasa dedicated to hadith studies, a Qur’an school, a medical school, a hospital, a hospice, a public kitchen, baths, and fountains. Finally, the architect was given a tomb on the grounds of his own design.

The building of the mosque was an immense undertaking. From information gathered from archival records, free paid laborers, recruits from the military, and enslaved people all contributed to the construction process. About half of the labor were Christian and half Muslim, pointing to the relative religious diversity of the Ottoman Empire at the time.2

The complex sits on the site of the first Ottoman palace, known as the Old Palace, on one of Istanbul’s seven hills toward the shore of the Golden Horn, above Eminönü. This site is one of the highest points in the old city of Istanbul and commands views over the Golden Horn to the north, as well as the Marmara to the south. It is also highly visible from these bodies of water, its slender minarets and ample dome towering over the city and even overshadowing the silhouette of Hagia Sophia itself, the preeminent source of inspiration and competition for Ottoman architects after the conquest of Constantinople.3

The complex is laid out on an irregular plot of land conforming to the topography of the site, which was terraced and uneven. The positioning of the various buildings that make up the complex, which strives for symmetry but is not completely symmetrical, is a result of the nature of the site.4 At the center and highest point of the area is a nearly rectangular enclosure inside which sit the mosque and, immediately to the southeast, the imperial tombs. The enclosure is delimited by a wall on three of its sides and a platform on the fourth (southeast) side. The area between the mosque and mausoleums and the enclosure walls are left open as a park. Paths lead from gates on the enclosure walls to various points around the mosque’s perimeter, some cutting straight and others diagonally across the green.

Outside the enclosure wall is a public avenue that follows the U-shaped path of the wall. On this avenue sit the various service buildings associated with the complex, all built according to the same northwest-southeast alignment of the mosque and its surrounding rectangular enclosure. Two madrasas, the medical school, and the hospital line the southwestern arm of the avenue; the hospice and guest house line the northwestern arm; and two other madrasas line the northeastern arm. At the end of this arm lies the hadith school, which extends along a street that runs directly south, taking the form of an appendage oriented differently than the other buildings on the campus.

The mosque represents the culmination of the Ottoman style that had been developing in the previous century. It comprises a grand prayer hall in the form of a domed cube and a large open court that precedes the prayer hall on the northwestern side. The main entrance to the courtyard is through a monumental portal on the northwestern façade, which funnels visitors through a gate surmounted by a muqarnas hood. The courtyard is rectangular, paved with marble slabs, and surrounded on three sides by a low, domed arcade. The portico of the prayer hall, taller and grander than the other three arms of the arcade, occupies the fourth side of the courtyard. At the center of the courtyard is a fountain in the form of a rectangular cube, made of intricately worked marble screens and panels.

The prayer hall façade consists of a nine-bay portico. Under each bay, two windows open onto the court, one near ground level and one on a second story. The windows on the ground floor are all surmounted by inscription plaques. In the central bay, a large portal covered by a muqarnas hood ushers visitors into the prayer hall. From the courtyard, one gets a view of the prayer hall domes, arranged as a pyramid. The large central dome is bolstered by flying buttresses on the drum which sit on the two semidomes and two arches opening below. Below these on either side, five smaller domes indicate bays on the interior of the mosque, and add to the sculptural feeling of the roof.

The prayer hall consists of a central square bay surmounted by a very large dome supported by four arches resting in turn on massive pillars. To the northwest and southeast, this lofty space is extended through the arches by semi-domes that cover long, rectangular bays, one housing the mihrab and another the entrance portal. To the southwest and northeast, the height of the ceiling falls, and triple arches below the springing of the large arches supporting the dome lead onto aisles five bays long, with each bay covered by a smaller dome. Light streams into the prayer hall through windows lining the drum of the central dome, the two semidomes, and in the walls filling in two side arches, as well as windows lower down. It is a bright, open space, creating a feeling of lightness and airiness throughout, and represents a monumental achievement given the size of the dome.

Directly behind the qibla wall of the mosque is a square enclosure whose side walls align with those of the prayer hall. Within the enclosure, two domed octagonal pavilions mark the resting places of Sultan Süleyman and his wife Hürrem Sultan. Süleyman's tomb is the more architecturally elaborate of the two, with an arcaded veranda wrapping around its exterior.

The four madrasas devoted to Islamic law take nearly the same plan, based on the traditional form of this building type: a central courtyard surrounded by an arcade gives onto small cells around the perimeter of the building. Each cell and the bays of the arcade that front them are covered by small domes. On the southwest side of the courtyards, a larger domed room serves as the study hall (dershane). The first and second madrasas (on the southwest side of the complex) are two separate buildings divided by a small alleyway. The third and fourth madrasas (on the northeast side of the complex) are actually joined together by a narrow courtyard, and are fronted by a row of shops that line the avenue separating madrasas from the enclosure wall around the central mosque-mausoleum complex. The third and fourth madrasas also do not have an arcade on the southwestern wall of their central courtyard, but rather flights of stairs leading up to the domed dershanes, whose entrances are on the sides at the top of the stairs to accommodate for the sharp slope of the hill on which these madrasas sit.

Adjoining the northeastern wall of the second madrasa (on the southwestern side of the complex) is the medical madrasa. It takes the form of a large open courtyard with a row of rooms on its northeastern side.

The hadith madrasa also takes an irregular form: it consists of a row of cells fronted by an arcaded, domed portico that extends like an arm from the southern corner of the mosque-mausolea enclosure at a bent axis to the south, in line with an access road. The portico is eighteen bays long and there are twenty two cells, so that four cells extend beyond the end of the arcaded portico. Opposite the arcaded portico, an enclosure wall with several gates leads onto a larger, irregularly shaped open space below the platform on the southeastern side of the mosque-mausolea enclosure housing the imperial tombs.

The soup kitchen is organized around a central square courtyard enveloped by a domed arcade. This arcade gives onto larger domed spaces on three sides, used for storage and cooking.

The guest house is organized around a central, rectangular courtyard enveloped by a domed arcade. The entrance is an iwan leading onto the courtyard arcade. Directly opposite the entrance is a larger domed iwan, and the lateral sides also have iwan-like spaces at their back corners. All other bays of the domed arcade give onto small domed cells.

Necipoğlu, Gülru. “Challenging the Past: Sinan and the Competitive Discourse of Early-modern Islamic Architecture.” Muqarnas 10 (1993): 169-180.