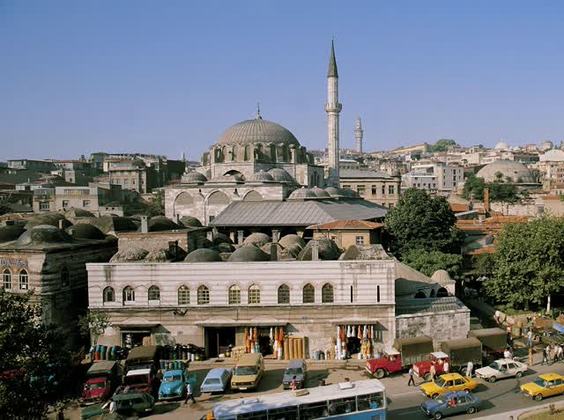 Share
Rüstem Paşa Camii is located above the Hasırcılar Çarşısı, the Weavers' Market, in the Eminönü district, in the Tahtakale neighborhood of Istanbul.  As indicated by a four-line inscription, the mosque was commissioned by the Grand Vizier Rüstem Pasa, son-in-law of Süleyman the Magnificent, and was built by Mimar Sinan in 1561. However, archival documents make clear that the site was still being cleared in the fall of 1562/970 AH, so it is unlikely that construction was finished until 1563/970-971 AH.1 The mosque constitutes the third in a series of edifices designed by Sinan at the request of the Grand Vizier, following the Rüstem Pasa Madrasa and the Rüstem Pasa Mosque in Tekirdağ.
Site layout:
The mosque is located in the low-lying neighborhood below the Süleymaniye at the center of a bustling market near the banks of the Golden Horn. Before the conquest of Istanbul, a Byzantine church stood on the site, which Haci Halil Ağa converted to a mosque in the fifteenth/ninth century AH. The mosque is elevated above its dense surroundings as it sits on a vaulted substructure that housed warehouses, fitting for the mercantile surroundings of the neighborhood. To the west of the mosque is a cemetery, and a square was later added behind its qibla wall.
The mosque:
The Rüstem Paşa Mosque is a two story building. The ground floor is occupied by a vaulted warehouse while the second floor is occupied by the mosque, consisting of a rectangular domed prayer hall fronted by a double portico. The first story of the main facade (northwestern) is occupied by an arcade of nine broad pointed arches giving access to the warehouse. Flanking this arcade are two towers housing staircases that give access to the second story. Surmounting the nine-arched arcade on the ground floor is a parapet consisting of thirteen smaller arches.
Ascending the stairs, one enters the second story on the open-air porch, which overlooks the street below through the arcaded parapet. Behind this is the U-shaped outer section of the portico, covered by sloping roof. Beyond this is the inner part of the portico, which consists of five domed bays fronting the prayer hall of the mosque.
The main entrance to the prayer hall is located under the central domed bay of the five-bayed inner portico. The prayer hall is covered by a central dome flanked by double-height wings, which are cloister-vaulted on the northeast and barrel-vaulted on the southwest. The dimensions of the prayer hall are approximately 26.8 by 19.6 meters, with the qibla wall along the longer side. The central dome, with a diameter of 15.2 meters and a height of approximately 22.8 meters, is raised on a cylindrical drum on an octagonal base. This base is supported by eight octagonal pillars placed on the corners of the octagon; four of them partially buried inside the walls, and four of them are free-standing, tied by semi-circular arches. Squinches intervene between the cylindrical drum and the octagonal base, transferring the load to the pillars through muqarnas pendentives. Four semi-domes are placed on the diagonals of the prayer hall. The mihrab is covered with a muqarnas semi-dome. The base of the minaret is embedded in the western corner of the prayer hall. The interior is lit by twenty-four apertures on the drum of the central dome, along with two series of rectangular openings on the walls of the first and second floor and the grille-covered openings located within the tympanums of the main arches
The interior of the mosque, and a part of the exterior northwestern elevation of the prayer hall, are clad with colored Iznik tile panels decorated with floral arabesques. Red and white stones form the arches supporting the central dome and the slightly pointed arch that crowns the wooden doorway of the main entrance. The roofs of the side wings are decorated with wooden colored reliefs organized into geometric patterns. Floral frescoes decorate the center of each dome, while Thuluth inscription plaques are placed above the doorways, and medallions with Arabic inscriptions are situated between the arches of the external portico and on the squinches.
On the lower level, the nine arches of the northwestern facade lead onto nine vaulted shops. Behind these are two barrel-vaulted stores under the double porticoes.
The mosque was damaged by fire in 1660 and by an earthquake in 1766; in both instances, the damage was immediately repaired. Nineteenth-century Baroque frescoes, layered over the surfaces of the four semi-domes on the sides of the octaglon, were removed during a 1960-1961 restoration organized by the religious foundation. The Rüstem Pasa Mosque was most recently restored between 1964-1969, and now functions as a mosque and monument.
Notes:
Sources:
Beck, Christa and Christiane Forsting. Istanbul: An Architectural Guide, 118-119. London: Ellipsis Limited, 1997.
Burelli, Augusto Romano. La Moschea di Sinan. Venice: CLUVA, 1988.
Egli, Hans G. Sinan: An Interpretation, 84-87. Istanbul: Ege Yayinlari, 1997.
Gennaro, Paola. Istanbul: l'opera di Sinan, 28-31. Milano: Cittàstudi, 1992.
Goodwin, Godfrey. A History of Ottoman Architecture. London: Thames and Hudson, 1997.
Goodwin, Godfrey. Sinan: Ottoman Architecture and its Values Today, 50-51. London: Saqi Books, 1993.
Gunay, Reha. Sinan: The Architect and His Works, 79-82. Istanbul: YEM Yayin (Yapi-Endustri Merkezi Yayinlari), 1998.
Kuran, Aptullah. Sinan: The Grand Old Master of Ottoman Architecture, 51-52, 138-149. Washington, D.C.: Institute of Turkish Studies, Inc., 1987.
Necipoğlu, Gülru. The Age of Sinan: Architectural Culture in the Ottoman Empire. London: Reaktion Books, 2005.
Sözen, Metin and Sami Güner (phot.). Sinan: Architect of Ages, 182-187. Istanbul: Prepared under the auspires of the Turkish Ministry of Culture and Tourism, 1988.