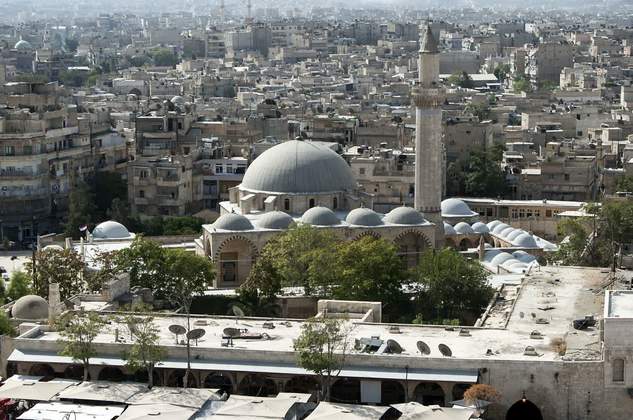 Share
The Khusruwiyya Complex is situated to the southeast of the Citadel, facing its main entrance. It is the first Ottoman monument of the city. It was built under the patronage of the "Divane" Hüsrev Pasha, while he was serving as the fourth vizier under Sultan Suleiman I (1520-1566), and completed a year after his death in 1546. It is one of the early mosques by renowned court architect Sinan. The complex consists of a mosque and madrasa to the south and north of a courtyard centered on an ablution fountain, and a secondary madrasa to the west of the mosque. The ensemble is enclosed within precinct walls.

The mosque is composed of a five-bay arcaded portico preceding a cubical prayer hall roofed with a low hemispherical dome. The portico is centered on the prayer hall but juts out by a single bay on each side, aligning itself with the two domed dervish lodges (tabhane) flanking the cube. Six monolithic marble columns with muqarnas capitals carry the portico arcade, which is raised on podiums on either side of the entry bay. Its arches are built with alternating voussoirs of black and white stones and its bays are roofed with identical small domes, with the exception of the slightly higher dome of the central bay. The portico façade is symmetrically laid out; it has four windows and two muqarnas mihrab niches carved into stone. Underglaze tiles adorn the tympana of the windows. At the center, the arched doorway of the prayer hall is built with joggled black and white stone voussoirs and set in a tall rectangular frame with a muqarnas crown. It is flanked on either side by engaged columns delicately carved with floral arabesques. There is a dedicatory inscription in Arabic above the doorway composed in nakshi script.

The square prayer hall measures about two hundred and ninety square meters and is covered with a dome measuring eighteen meters in diameter. It rests on eight black and white arches that transition from the square walls to the circular drum with the help of muqarnas squinches placed at the four corners. Centered on the qibla wall, the mihrab has a double marble frame built largely of black stones and decorated with carved stone and polychrome stone inlays. A calligraphic band runs along the springer of the niche arch. The interior is lit with two lower casements topped with an arched window and two circular windows on each wall. There are also sixteen arched windows along the dome's base, which are accessible from a circular balcony decorated with a calligraphic band.

Outside, the dome of the prayer hall is braced with eight flying buttresses and covered with lead tiles. A pencil-shaped minaret rises to the west side of the portico, adjacent to the dervish lodge. It has a façeted shaft interrupted by a balcony resting on muqarnas corbels and protected by a carved stone balustrade. Just below the balcony, the shaft is decorated with bands of blue and white tiles. The minaret terminates at a conical lead dome.

The primary madrasa faces the mosque to the north and wraps around the courtyard to the northwest. The north wing has ten domed cells entered from a cross-vaulted arcade, and the northwest wing has a section covered by eight domes arranged in two rows of four, probably housing the kitchen and bakery. A secondary madrasa is placed to the west of the mosque and is composed of fourteen domed cells on three sides of a courtyard bound by the mosque wall to the east. A large domed classroom is accessed through the southern madrasa wing. To the south of the mosque is a small domed mausoleum where the wife's patron, son and nephew are buried.
The Khusruwiyya Mosque was heavily damaged during the Syrian Civil War.