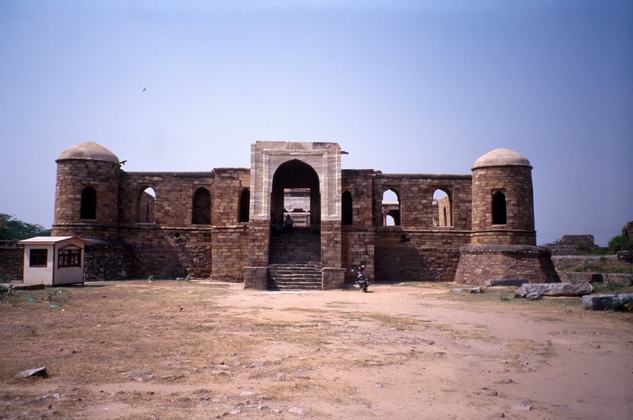 Share
The Sultan Ghuri Tomb, a fortified mausoleum in Delhi, was built by Sultan Iltutmish (r. 1211-1236/607-633 AH) for his eldest son Nasir-ud-Din Mahmud. It is considered the first monumental tomb built in the Indian subcontinent. An inscription on the eastern portal dates the tomb to 1230/627 AH.
The tomb is located in an isolated area, and is an octagonal structure sunk within a courtyard on a high square plinth, enclosed by stone walls with circular corner bastions. The octagonal platform set within the courtyard forms the roof of the subterranean crypt below, an arrangement not found again in India until the 17th century. The tomb is built on the site of a Hindu temple and incorporates Hindu masonry, including lintels and sculpted 7th-century panels.
A mihrab is incorporated into the western wall of the tomb for the first time, along with a small columned prayer area in front of it, intended to give the tomb a religious sanction and ensure that future rivals and opponents would not destroy the grave.
The tomb was renovated during the time of Firuz Shah Tughluq (r. 1351–1388/751-789 AH).