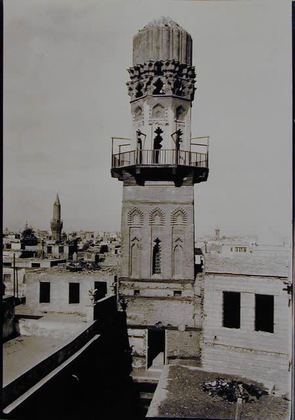 Share
The Madrasa of al-Salih, the first in Egypt to be built for all four Sunni schools of Islamic law following the example of the Madrasa al-Mustansiriyya in Baghdad (1233), was constructed under al-Salih in 1242-44. This monument thus marks the introduction of what became a basic Mamluk mausoleum formula: a tomb adjoining a theological school. Later, this madrasa came to be more than just a center for worship and scholarship. Here the four chief religious justices, or qadis, heard cases referred to them from lower courts. Throughout much of the Mamluk period, they formed the supreme judicial tribune of the state. This was the center of the town, the courthouse square of Cairo.

The madrasa consists of two wings separated by a public passage, each wing comprising a courtyard onto which two opposing iwans open. The larger of the two iwans is oriented towards Mecca. Two stories of student living units occupy the lateral sides of each of the two courtyards. Each one of the four iwans served as a study area designated for one of the four schools. Teachers taught in their own houses. The arrangement of two iwans on the opposite sides of a courtyard and student cells on its lateral sides may have evolved from the residential qa'a configuration consisting of two iwans on the opposite sides of a durqa'a (square space covered by a skylight).

The mausoleum, the first in Egypt to be attached to a madrasa, was built by Salih al-Din's wife Shajarat al-Durr in 1250. The transitional zone has the earliest example of a Cairene three-tiered brick muqarnas squinch.

The mihrab of the mausoleum is the earliest extant example of an Egyptian prayer niche with a marble lining.

The minaret is the only fully preserved minaret from the Ayyubid period. It consists of a square shaft carrying an octagonal second story displaying lobed-arched openings and surmounted by a ribbed helmet supported by an open octagonal structure. A ribbed helmet resting on an open circular or octagonal structure is known as mabkhara or "incense burner." The use of the term mabkhara to denote a type of minaret was introduced by the Orientalist Richard Burton, who had been told that the Fatimid Caliph al-Hakim burned incense in his minarets to perfume the mosque. The minaret is strategically located above the gateway to the passage between the two wings of the madrasa.

The qibla orientation of the interior of the madrasa and mausoleum is reconciled with that of their street facades, which follow the street alignment, by gradually increasing the thickness of the wall of this facade, thus transforming the windows into deep recesses; at the street end these windows have iron grilles. In the mausoleum, these window recesses are in the part of the mausoleum that protruded into the street; in them, behind the iron grilles, sat the reciters of the Qur'an whose recitations invoked the blessings of the passers-by.

The exterior of this complex continues the Fatimid legacy of displaying chamfered corners (only extant on the west corner of the mausoleum) and recesses surmounted by keel-arched, fluted shells.

This monument represents the architectural and institutional transition between the Fatimid monuments and the subsequent Mamluk complexes. During the Mamluk period this madrasa served as the supreme judicial tribune of the state, for it was the seat of the four chief qadis where cases referred to them from lower courts were heard. The domed mausoleum was a site for great Bahri Mamluk ceremonials, for it was there that new Mamluk amirs, upon descending from the Citadel in a long procession, pledged allegiance to the sultan.