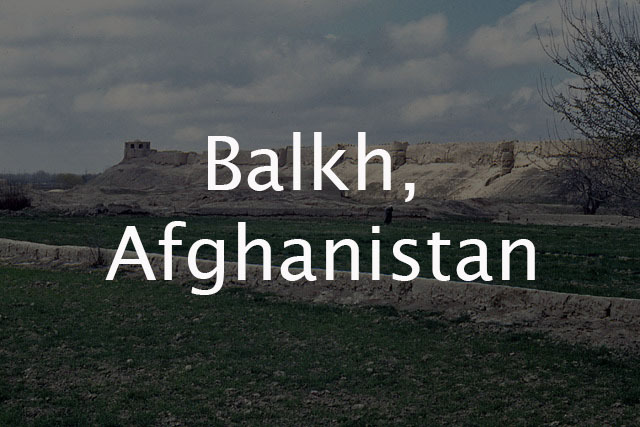 Balkh (ancient Bactra) is a city in northern Afghanistan. It lies on an alluvial fan to the west of Mazar-i Sharif, the modern regional center and capital of the province of Balkh. Balkh is a city of great antiquity, pre-dating the Islamic period by centuries. It gave its name to the satrapy (province) of the Achaemenid Empire known as Bactria, and remained an important regional center – at times ruled independently – during the Hellenistic and Islamic periods. Only in the mid-nineteenth century, with the growth of Mazar-i Sharif, did the ancient city lose its regional importance. Its longstanding significance was in part due to its location at the crossroads of east-west caravan networks linking Transoxiana to India.1
Islamic Balkh comprised a walled inner city or shahristan and a suburban area or rabad. The oldest section of the city dating to before the Hellenistic period is an enclosure, roughly circular in plan, known as Bala Hisar. A fortified citadel (arg) was located along its southern walls. The city expanded into the areas south and east of the original circular enclosure, and defensive walls were built around this exterior area during the Hellenistic period and renovated and extended in Islamic times under the Timurids. The modern town of Balkh lies south of the Bala Hisar in the area of expansion mentioned above.
Remains of several important Islamic monuments can be found within and surrounding the city. The oldest Islamic monument on site is the Mosque of Haji Piyadah, also known as the Masjid-i Nuh Gumbad (Mosque of Nine Domes), which likely dates to the 9th/late 2nd or early 3rd century AH. The form and ornamentation of this mosque speak to the linking of Afghanistan and the central Islamic lands, for the piers and springing of the arches that once supported its domes retain stucco ornament stylistically similar to that found at imperial Abbasid sites in Mesopotamia. At the center of the modern city stand the Timurid Shrine of Abu Nasr Parsa (d. 1459-61/864-5 AH) and the 17th century Madrasa of Sayyid Subhan Quli Khan. The Balkh oasis also boasts the remains of several pre-Islamic, Buddhist monuments. The mound known as Tepe Rustam contains the remains of a grand stupa. It is thought to be the shrine of the monastery known as Naw Bahar mentioned in many Islamic and pre-Islamic sources. The ruins of the shrine itself may be synonymous with another nearby mound known as Takht-i Rustam.
Notes:
Sources:
“City of Balkh”. UNESCO World Heritage Center. Website. http://whc.unesco.org/en/tentativelists/1928/. [Accessed November 20, 2019]
Allchin, F. R., and Norman Hammond. The Archaeology of Afghanistan from Earliest Times to the Timurid Period.  London, New York, and San Francisco: Academic Press, 1978.
Ball, Warwick. Archaeological Gazetteer of Afghanistan. Revised Edition, Cat. 99 (pp. 42-46). Oxford: Oxford University Press, 2019.
Paul, Jürgen. ‘Balkh’. In Encyclopaedia of Islam, THREE, edited by Kate Fleet, Gudrun Krämer, Denis Matringe, John Nawas, and Everett Rowson. http://dx.doi.org/10.1163/1573-3912_ei3_COM_23449 [Accessed November 20, 2019].
Simpson, St J., F. Hiebert, P.L. Kohl, R. Talbert, Jeffrey Becker, W. Röllig, Tom Elliott, H. Kopp, DARMC, Sean Gillies, B. Siewert-Mayer, Francis Deblauwe, and Eric Kansa, 'Bactra/Zariaspa: a Pleiades place resource', Pleiades: A Gazetteer of Past Places, 2019 https://pleiades.stoa.org/places/961886 [accessed: 05 December 2019]. 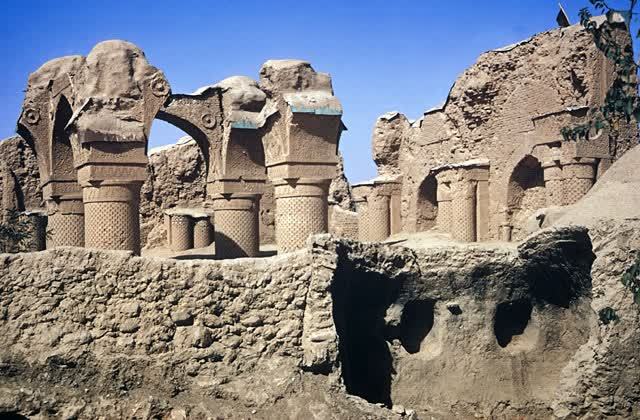