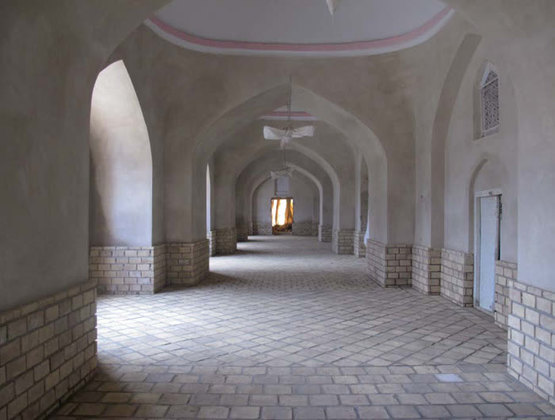 The Dehdadi Mosque was built in what we believe to be two distinct periods. The wooden veranda with intricate decoration seems to hail from the 18th century, while the masonry brick domed and vaulted range of rooms was built in the early part of the 19th century. The Mosque and the khanaqa was built by Mirza Mohammad Yousuf, a Sufi mystic who distinguished himself as a scholar and poet.

The Dehadadi Mosque or Khanaqa (place of Sufi worship) was built in two distinct phases and architectural styles using highly intricate wood carved elements and floral stucco decoration. The large site includes a large reflective water pool and an open-plan madrasa used for religious education and mass prayer. Remaining historic structures in Balkh consist mainly of mosques, shrines, and madrasas, reflecting the deeply religious nature of these communities and the sustained religious donations (zikat) that are made towards the maintenance of these structures. In addition to worship and religious education, such communal spaces are often used by the residents of the area to hold council, discuss community matters and at times for large gatherings aimed at finding resolutions to shared problems. As such they represent important spaces of prayer, teaching, communal and social interaction.

Internally, the Dehdadi Mosque itself has finely carved doors and painted stucco decoration on the upper parts of the arches, domes and the mihrab, resembling similar religious buildings in Bukhara from the 18th and 19th centuries. In the oldest section of the Mosque, the wooden pillars stand on unique cylindrical bases, and its main walls are covered in finely carved plaster floral motifs resembling the ‘tree of life’. Following an initial survey of the khanaqa in 2009, the Aga Khan Trust for Culture has monitored the condition of the monument since commencing conservation works in Balkh in 2011. Continued erosion coupled with extensive damage caused by rain and snowfall has resulted in the destabilization of the structure to the extent that urgent conservation works are required in order to safeguard the Mosque.

The objective of the project was to undertake essential repair and restoration works on an important historic monument in Balkh, employing local craftsman and daily labourers ensuring that the trained personnel can assist with future maintenance of the site. Additionally, the project aimed to make the site safe and accessible for use by the community as a religious and social space. This project will also provide a platform for continued development of Afghan professional capacity and training for skilled craftsmen. The Mosque, as both a historic monument and a place of worship, remains an important part of social adhesion for the surrounding community. Any work undertaken would enjoy their support and that of local authorities and the various departments of the Ministry of Information and Culture. Furthermore, the project aimed at increasing public awareness towards the importance of preserving Afghanistan’s built heritage.