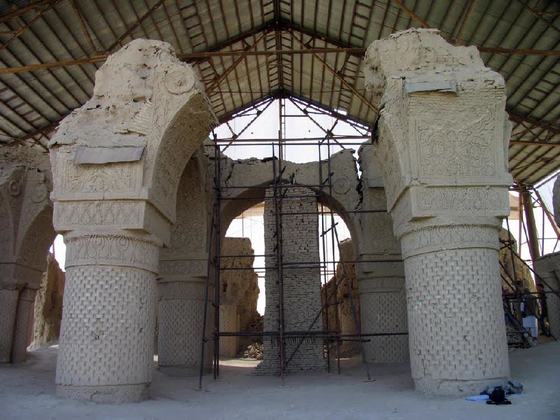 Share
Built between the early eight century and the first half of the ninth century CE, the Noh Gunbad Mosque is believed to be the oldest and most important early Islamic-era building in Afghanistan and possibly in the wider region.

With its original features it stands out as an early example of an innovative style for mosques, probably influenced by pre-existing Irano-Sassanid patterns. The exquisite and rare stucco decorations that remain on the columns and arches are believed to be in early Abbasid or Samanid styles and the building has been placed on a tentative list in UNESCO's World Heritage List. With all nine domes collapsed, the three standing columns and two arches constitute the architectural and artistic core of the site. Badly damaged by time and disregard, the risk of structural failure of the arches in the event of an earthquake is extremely high.

The structural instability of one of the remaining four freestanding columns has resulted in severe damage to the main arch that rests upon this column, threatening the structural integrity of the whole site and the survival of the plaster decorations.

The Aga Khan Trust for Culture (AKTC) is completing a project to stabilize the damaged column and arch and to protect the plaster decoration. This project is being implemented together with Afghan authorities from the Ministry of Information and Culture and local institutions in Balkh province, and coordinated with international partners including the Délégation Archéologique Française en Afghanistan (DAFA), Associazione Giovanni Secco Suardo / World Monuments Fund, Centre National de la Recherche Scientifique (CNRS), UNESCO and other technical partners.

The restoration is being undertaken with support from the Ambassadors Fund for Cultural Preservation of the US Government.