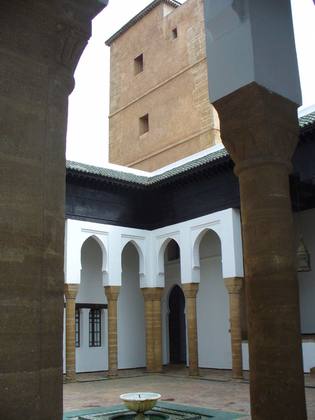 Share
The Kasbah is a large palatial complex comprising multiple palaces, institutional buildings, extensive gardens, reservoirs, and a network of ramparts. The palace was constructed in the late seventeenth century under the close supervision of 'Alawid Sharif Moulay Ismail (reg. 1672-1727). A contemporary and admirer of French sovereign Louis XIV (reg. 1643-1715), Moulay Ismail was an absolute ruler obsessed with cultivating a personal building legacy. Immediately after assuming power in 1672, Moulay Ismail began the development of Mèknes into the new capital of the 'Alawi empire. Mèknes, at that time a modest city with a market-based economy, was not nearly as culturally or politically significant as the former regional capitals of Fez or Marrakech. However, Moulay Ismail elected to transform the neutral space of Mèknes into a new imperial city in order differentiate himself from his predecessors, and to consolidate political and military power at a distance from the cities that had once supported his opponents.

As a result of Ismail's single-minded interest in developing the capital as a monument to himself, the Kasbah of Mèknes is more than four times larger than the medina of the city, even after continuing growth of the medina during Ismail's rule. Mèknes became the "Moroccan equivalent of Versailles" in little more than a decade. Construction on the royal city continued until Moulay Ismail's death in 1727.

The royal city of Moulay Ismail is bounded by three sets of fortified perimeter walls, each nested inside the other. The outermost fortifications of the Kasbah, known as the "wall of the wealthy," are the best preserved of the fortifications. These massive defensive structures measure between nine and twelve meters in height, complete with bastions and elevated walkways shielded by stepped merlons. The overall area defined by the perimeter of the outer ramparts is approximately 3.5 kilometers wide east to west and 1.2 kilometers long north to south. The north-south axis of the Kasbah is rotated thirty degrees toward the east from the north-south meridian. Parts of the outer zone of the Kasbah have been filled with dense housing in the centuries since Moulay Ismail's rule, although roughly two-thirds of the land in the outer areas of the royal city is still used as gardens or recreational space.

The core of the palatial complex is a smaller area bounded by another set of ramparts interior to the fortifications marking the outer boundaries of the Kasbah. In contrast to the outer ramparts, the inner rings of fortifications are simple in section and lack bastions or defensive merlons. The perimeter of the inner Kasbah is irregular in its articulation, but the footprint of the core can be roughly described as trapezoidal in shape. The inner Kasbah is nested in the northwest corner of the royal city, just slightly inside the north and west walls of the outer ramparts. The area defined by the innermost ramparts is approximately 1.2 kilometers wide east to west and between 0.5 and 1.1 kilometers long north to south. A smaller secondary projection of the plan of the central Kasbah, to the northwest of the primary inner area, is approximately ninety meters wide east to west and 0.5 kilometers long north to south. The southernmost ninety meters of the eastern edge of this smaller section is coincident with the northernmost ninety meters of the western edge of the main complex, creating a shear connection in plan between the two areas.

Several monumental gates mark points of entry into the royal city. During Moulay Ismail's rule, the primary entrance to the Kasbah was the Bab al-Mansour. This gate features an unusual structural configuration, with arcaded bastions on each side of the central horse-shoe arched portal. The primary entrance to the palace today is the Bab al-Makhzan, or the "gate of the royal palace."

The imperial city of Mèknes contained three distinct palace complexes within its bounding walls: Dar al-Kebira, Dar al-Madrasa, and Ksar al-Mhanncha. The first palace to be constructed, Dar al-Kebira was built in 1672 on the site of the ruined Almohad Kasbah. This now-ruined complex of around twenty separate palace structures, or ksour, was known collectively as the "Great House." The overall organization of the Dar al-Kebira was irregular due to the aggregative nature of its design. One particularly notable structure within the original palace was the Koubba al-Kayatin, a pavilion used for diplomatic receptions. The architecture of the Koubba al-Kayatin was distinct from the other ksour, which accommodated a variety of non-official programs. A second architectural feature of the Kebira palace was the Habs Qara, or the "Prison of the Christians," a large underground network of tunnels that held thousands of Christian prisoners whose labor contributed to the construction of the imperial city itself.

The mausoleum of Moulay Ismail is also located within the Dar al-Kebira. Well-maintained during the centuries since Moulay Ismail's death, this structure contains the tombs of Moulay Ismail, his wife Lalla Khouata, and his descendants. Quoting the plan of the Tombs of the Sa'dian rulers in Marrakech, the mausoleum is a series of three linked funerary chambers, the large square central chamber being the home of the tomb of Moulay Ismail alone. The ceiling of the central chamber is supported by twelve columns delineating a gallery around the perimeter of the space. The decor of the interior of the mausoleum is much simpler than that of the Sa'dian rulers in Marrakech, featuring tile mosaic floors but otherwise unadorned walls and ceilings. Each of the three chambers is capped by a pyramidal roof of green ceramic tile, typical of Moroccan funerary architecture; the central pyramid, rising several meters above the two minor pyramids flanking it, is surmounted by a finial of four stacked copper spheres.

The Dar al-Kebira was separated from the edge of the Médina by the Place al-Hedim during its original occupation. After centuries of decline following Moulay Ismail's rule, the ruins of the Dar al-Kebira were absorbed into the medina. The complex is now a field of temporary residences of low-income residents. Little of the original architecture remains, though the excellently preserved mausoleum is a notable exception.

The second palace of Moulay Ismail was also ruined during the centuries since its construction. This palace, known as the Dar al-Madrasa, was located south of the Dar al-Kebira. It was located within the walled perimeter of the Kasbah and bounded by one of the interior rings of pisé ramparts. The Dar al-Madrasa included a series of freestanding buildings organized around patios and gardens, including housing pavilions for Moulay Ismail, his wives, and mistresses; a belvedere; hammams; kitchens; and a prayer room and minaret.

The third palace, the Ksar al-Mhanncha, is unique in that it features a regular organization in plan, as opposed to the asymmetrical, organic, and aggregative logic of the plans of the other two palaces. The Ksar al-Mhanncha was bounded by the second interior ring of pisé ramparts within the bounds of the Kasbah. A network of walls and elevated walkways interior to these ramparts further subdivides the palace into eight rectangular sections, aligned in two parallel rows of four parcels. The Bab al-Makhzen serves as the main entrance to the palace, opening onto a large courtyard. The courtyard is edged by porticoes, and the mosque of Moulay Sliman (reg. 1792-1822) anchors the end of the space opposite the entry gate. The center of the courtyard is the stage for two small pavilions: a treasury building and a menagerie known as "the Lion House," or Duwayriyat al-Sbaa. Winding paths that lead from this entry court to the main courtyards of the palace led this complex to be known as the "Palace of the Maze."

Between the Dar al-Madrasa and Ksar al-Mhanncha lies the Gharsat al-Rukhum, a large Andalusian garden. Termed the "Marble Garden," this large productive landscape was irrigated by the enormous Agdal reservoir at its center, which also provided irrigation to the rest of Meknès.

The royal city of Meknès was lavishly decorated and extremely expensive to construct. Though Moulay Ismail invested much of his significant personal wealth in the construction of the Kasbah, he also used his power as sovereign to plunder materials from the architectural masterpieces of the former capital cities. He obtained many of the materials needed for the ornamentation of the Meknès palaces from the Badi' Palace (1578-1594) in Marrakech. That architectural masterpiece had been constructed by Sa'did Sharif Ahmad al-Mansur (reg. 1578-1603) only a century earlier. However, Moulay Ismail's absolute rule was only strengthened by the destruction of the achievements of his predecessors, and consequently the 'Badi palace was mined for its exquisite artworks and rich materials throughout a ten-year period. Materials that came to decorate the interiors of the royal palaces of Moulay Ismail include exotic woods, Carrera marbles, onyx, ivory, gold-leaf, green ceramic roof tiles, and fine zellige, geometrically-patterned tile mosaics. The palaces of Moulay Ismail, like the 'Badi palace before them, were widely famed for their opulence. Contemporaries remarked that the only other royal residence that rivaled the Meknès complex in terms of richness and scale was Louis XIV's legendary palace at Versailles (1661-1710), which was under construction during the same period.

Sadly, in spite of the vast quantities of time, labor, and resources that Moulay Ismail invested in his palaces in Meknès, he was the only sovereign to occupy the complex in an intact state. After Moulay Ismail's reign ended with his death in 1727, the royal city was immediately abandoned by his predecessors. The Dar al-Makhzen, a residential pavilion within the grounds of the Ksar al-Mhanncha, has been continuously maintained for use by the 'Alawid royal family when they are in residence in the city. However, Meknès has not been the principal Moroccan capital city since its years of prestige and development under Ismail's rule.