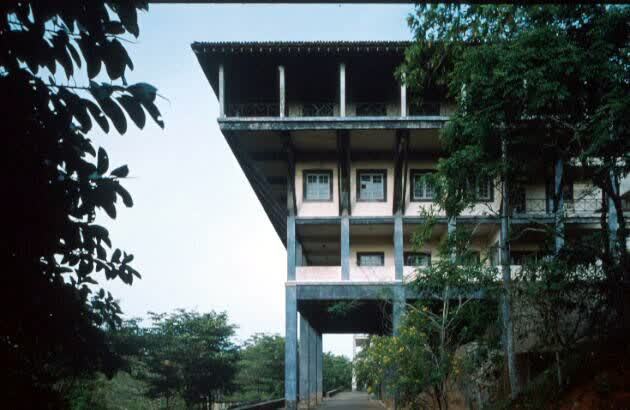 The commission for a new university campus arrived in April 1979 soon after that for the Parliament. Suddenly Bawa and his colleagues were faced with designing and running two huge projects simultaneously, each involving more than 40,000 square metres of building.

Ruhunu University was established in the Matara constituency of Ronnie de Mel, the minister of  finance, on three separate campuses: a general campus located on the south coast close to Matara town,and separate medical and agricultural campuses located on inland sites. Bawa was invited to design the general campus, which comprised science and arts faculties and central administrative facilities. It was planned to accommodate an initial three thousand students rising ultimately to a total of four thousand.
The 30-hectare site straddled three steep hills, the westernmost overlooking the sea and separated from the other two by a low-lying valley that carried the main road from Matara to Hambantota. Bawa placed the vice­chancellor's lodge and a guest house on the western hill and flooded the intervening valley to create a buffer between the road and the main campus. He then wrapped the buildings of the science faculty around the northern hill and those of the arts faculty around the southern hill, using the depression between them for the library and other central facilities.
A building project that in Europe would have been handled by a large team of architects and specialist consultants was run largely by an individual job architect: Nihal Bodhinayake. In typical fashion many of the important initial design decisions were taken by Bawa on site but he was happy to leave much of the detailed planning of the various buildings to Bodhinayake, therefore, unusually, had a site model made and used this to work out detailed level relationships between buildings. The model was located not in the main office where Bodhinayake worked but in the new 'home office' in 33rd Lane. It was here that Bawa would ponder the scheme and discuss its finer points with Perera, or Christoph Bon and Jean Chamberlin when they were in town.
Bodhinayake's problem was that he had to translate Bawa's ideas into the language of the building contractor. To this end he set up a strict grid based on 3 metres horizontally and 1.5 metres vertically in an attempt to fix the various pavilions on a system of coordinates and to standardize all junctions. Bawa grudgingly recognized the need for such a discipline, but reserved for himself the right to break it whenever he saw fit.
His overall strategy was developed from that used in earlier projects such as the Yahapath Endera Farm School and the Piliyandela Institute for Integral Education. Buildings were planned orthogonally on a north-south grid but were allowed to 'run with site'. Natural features such as rocky outcrops were incorporated into the bases of buildings or became focal features of the open spaces. Although there is nothing that connects the design in a literal way to historical precedents, the limited architectural vocabulary clearly derives from Porto- Sinhalese traditions and the topographical approach is reminiscent of that employed in the building of Kasyapa's Palace on the rock at Sigiriya.
The design exploits the site to make every part of the campus seem unique. Pavilions, varying in scale and extent, are connected by covered links and separated by an ever-changing succession of garden courts. Everywhere there are places to pause and consider, to sit and contemplate, to gather and discuss. The main routes either cut uncompromisingly across the contours or meander horizontally along them. Views are carefully orchestrated in a scenographic sequence that conceals and reveals in turn, playing the northern views of jungle and distant hills against the southern views of the lake and the ocean beyond, always referring back to the picturesque hump-backed bridge that connects the entrance across the lake to the central valley and acts as the linchpin of the whole composition.
Ruhunu is remarkable in that it is composed from a series of fairly simple and, in the main, unremarkable buildings - about fifty in total - all built with a limited palette of materials and a limited vocabulary of standard details. The construction is straightforward, comprising walls of plastered brick on a concrete frame and roofs of half-round tile laid on corrugated cement sheeting. Buildings are aligned carefully to minimize solar intrusion and mitigate the effects of the south-west monsoon. Few of the spaces are air-conditioned and the buildings rely for the most part on natural ventilation.
The project was let to Ballast Nedam, a Dutch firm of civil engineering contractors, though the subcontractors, craftsmen and labourers were all local. Work started on site in August 1980 and the final arts faculty buildings were handed over in July 1986, with the project continuing to final completion in 1988. The total cost, including site works and furnishings, came to 450 million rupees, equivalent at the time to about 9 million pounds sterling.The result is a modern campus, vast in size but human in scale. As Bawa wryly observed: 'If this place doesn't turn students into civilized beings, nothing will!'
Source: Robson, David. 2002. Geoffrey Bawa: The Complete Works. London: Thames & Hudson, 158-163.