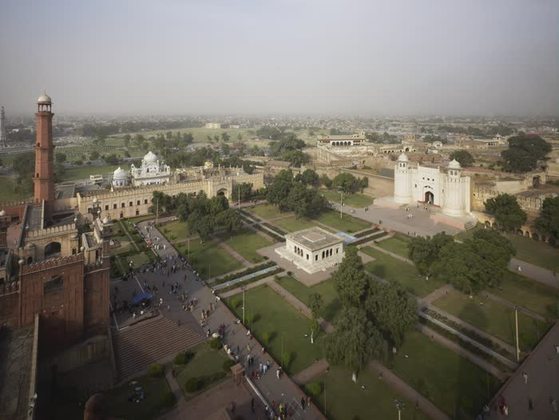 Share
Lahore is the site of the first Mughal conquests in India. Situated between the Mughal centers and the strongholds of Kabul, Multan, and Kashmir, the city had great strategic importance for the empire. It became the most important Mughal city after Agra, until Shahjahanabad eclipsed them both. Akbar rebuilt an earlier fort on the site, enlarging and strengthening it by replacing the original clay walls with solid brick masonry. Lahore fortress is contemporary to Agra Fort, and is based on the same formal organization, although it is smaller (roughly 365X304 m or 1200X1000 feet), and distinguished by strong Persian stylistic influences, as well as the Hindu influences also apparent at the Agra and Delhi forts. Akbar's successors Jahangir, Shah Jahan, and other Mughal, and later Sikh, rulers would make revisions, replacing many of the original buildings, but the scheme seems to have been preserved.

The high outer walls are decorated with blue kashi tiles of Persian origin. The fort has two distinct sections: the 'private', palatial section, and the administrative section, including areas for royal audiences. The residential section is arranged in courts along the northern half of the fort, and is accessed by the Hathi Pol, or 'elephant gate'. The northeastern section, which includes red sandstone buildings, is the oldest part of the residences, and was built in Akbari times. The Bari Khwabgah, or 'large bedroom', is attributed to Jahangir, and the Choti Khwabgah, in white marble, is a later addition by Shah Jahan. The Mussaman Burj, Naulakha Pavilion, and the Shish Mahal, known as the 'hall of mirrors', also by Shah Jahan, are examples of the ornate architecture in fine white marble work he brought to the Fort.

The more public, administrative section is organized in a layer that conceals the private one. It is accessed from the Alamgiri Gate, built by Awrangzib (1658-1707), which leads into the large courtyard of the Diwan-i-Amm, or hall of public audience. The Fort also contains gardens and a mosque, the white marble Moti Mosque by Shah Jahan. 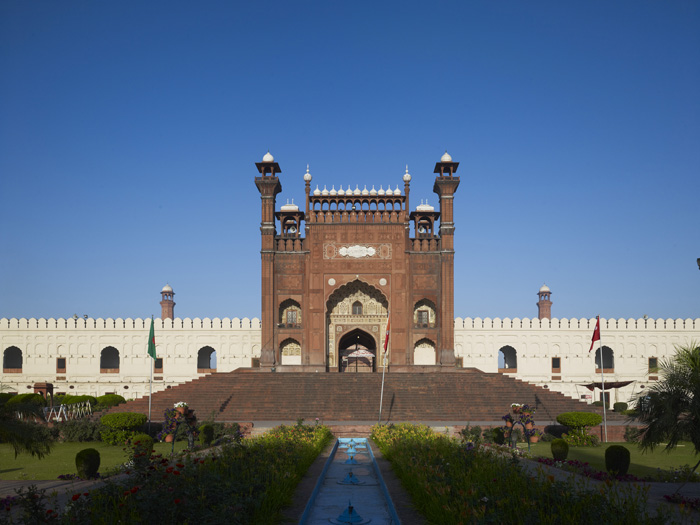