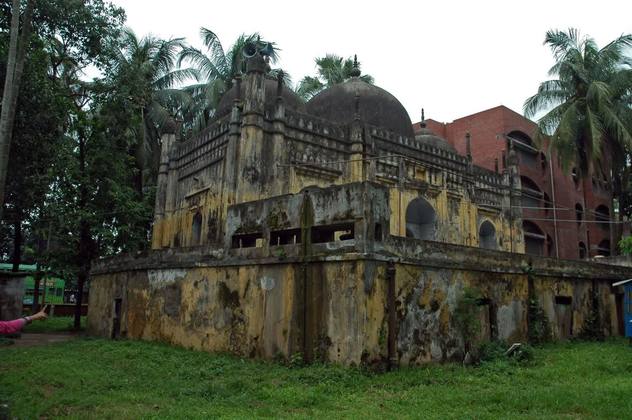 The date of construction of this rectangular platform mosque cannot be confirmed, as the inscription tablet over the central doorway is now missing. Based on stylistic reference, the mosque was possibly built during the reign of Shaista Khan or even later by Dewan Manawar Khan in memory of his grandfather Musa Khan. Most probably it was built during the second half of seventeenth century CE. The Musa Khan Mosque is located on the western side of Shahidullah Hall, Dhaka University, and within 500 meters of the Khwaja Shahbaz Mosque.

The Musa Khan Mosque is located near Mir Jumla’s Gate (Dhaka Gate), one of the oldest Mughal architectures of Dhaka, signifying the prominence of the place. The Musa Khan Mosque represents a typical Bengali platform mosque; that is, a three domed mosque sits on a rectangular raised platform. The mosque is a typical Bengali Mughal type where the central dome is larger than the other two.

The mosque has an oblong plan of 52'2" x 27'0" externally and 43'0" x 16'4" internally. The structure is divided into three equal interior bays, roofed over by three fluted, bulbous domes, resting on drums. The proportionately smaller lateral domes are placed on the equal size bays by splitting each dome into a half-dome and placing it on a pendentive. Probably the large arched cells underneath the platform were used for living purposes.  The space underneath the platform were arranged in four rows, where both eastern and western cells can be accessed from the exterior while inner cells are accessed through the eastern cells. The platform is accessed by a straight flight of stair on the south-west leading through a simple gateway.

The rectangular structure is buttressed by four corner octagonal turrets, capped by plastered cupolas. These turrets are rise slightly above the parapet walls and ribbed in typical Bengali fashion. Parapets are straight instead of the curvilinear cornice of pre-Mughal types. The eastern or main facade is visually divided into three sections. Each section contains an entrance doorway, flanked by its own pair of slender engaged columns. The entrances correspond to the three domes above and adorned by cusped arches. The western wall is internally recessed with three semi-octagonal mihrab niches, which are all arched. The arch of the central mihrab is multi-cusped, while the others are of plain four-centred. The larger central mihrab is projected outside having usual ornamental turrets.