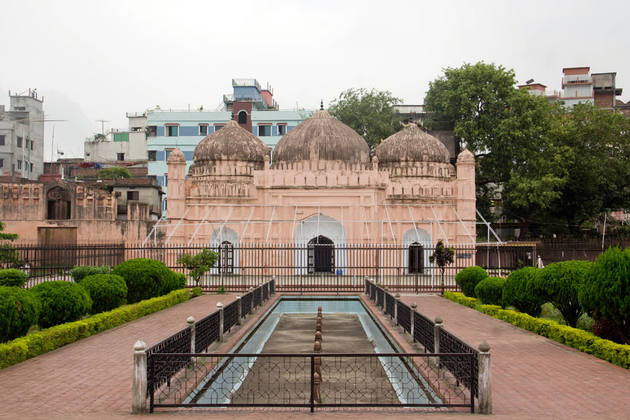 The date of construction this rectangular three-domed mosque inside the Lalbagh fort is problematic. Traditionally it is considered to be contemporary with the Lalbagh Fort, constructed by Muhammad Azam in 1678-79. However, recent exploration identified it as 1649, with a further restoration of 1780 (Hasan, 2007). The fort complex named Lalbagh stands before the Buriganga River in the southwestern part of Dhaka, Bangladesh.

This mosque, part of the Lalbagh Fort Complex and built under the rule of Governor Shaista Khan, is situated in the western part of the complex, aligned with the tomb of Bibi Pari. The Lalbagh Fort mosque is a typical Bengali Mughal type (Asher, 1984); that is, a rectangular structure crowned with three-domes. It is one of the finest examples of its kind, where the central dome is larger (Islam & Noblea, 1998).

The mosque has an oblong plan of 66'9" x 33'6" externally and 53'8" x 20'2" internally. The structure is divided into three equal interior bays, roofed over by three fluted, bulbous domes, resting on drums. The proportionately smaller lateral domes are placed on the equal size bays by splitting each dome into a half-dome and placing it on a pendentive. Stylistically this kind is known as Shaista Khani architecture, commonly found in and around Dhaka.

The rectangular structure is buttressed by four corner octagonal turrets, capped by plastered cupolas. These turrets rise slightly above the parapet walls and ribbed in typical Bengali fashion. Parapets are straight instead of the curvilinear cornice of pre-Mughal types. The eastern or main facade is visually divided into three sections. Each section contains an entrance doorway that correspond to the three domes above and adorned by cusped arches.  The middle section is emphasized by a frame of slender, engaged columns, a raised cornice, and a larger dome. The Lalbagh Fort Mosque's north and south interior walls are divided into a series of horizontal panels, reflecting the motifs on the exterior. The three mihrabs contain faceted stucco work similar to that on the entrances.