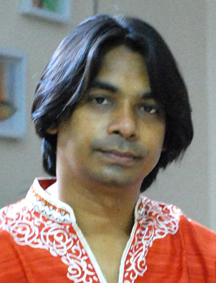 Mohammad Habib Reza is an architect and architectural historian, presently working as an Assistant Professor of Architecture at BRAC University where he has been teaching since 2013. His interest focuses on the geometric and morphological development of architecture plus settlements and their connection with cultural, social and religious processes. His research further explores the connection between Bengal and other culture, focusing their architectural styles.

Dr. Reza earned his Bachelor of Architecture from the Khulna University, Bangladesh in 2001 and PhD in architectural history and theory from Nottingham Trent University, UK in 2013. His PhD title was “Early Buddhist Architecture of Bengal: Morphological study on the vihāras of c. 3rd to 8th centuries”, where he proposes the morphological development pattern of ancient and mediaeval Buddhist architecture of Bengal. He was involved in research projects funded by Nottingham Trent University and the Ministry of Heritage and Culture of Oman, for the documentation of traditional oasis settlements in Central Oman towards the delivery of culturally and technically informed Heritage Management Plans. He is also a founder member of the Centre for the Study of Architecture and Cultural Heritage in India, Arabia and the Maghreb (ArCHIAM), based at the University of Liverpool aims to provide an interdisciplinary research platform for historical and contemporary cultural developments across three interconnected global regions. He recently completed a collection The Islamic Heritage of Bangladesh, a collaboration between BRAC University, Archnet and Aga Khan Trust of Culture.

Five of his (as a team member) heritage management plan is published as a government report by the Ministry of Heritage and Culture of Oman, that includes the Documentation and Heritage Management Plan of the settlement of world heritage site BAHLA: HARAT Al-AQR. He is currently working on two projects: a co-edited book on architecture, built environment and cultural heritage of Bengal, titled, Re-imagining Bengal: Architecture, Built Environment and Cultural Heritage, which will be published in 2017 and a book on the heritage of Khan Jahan Ali, tentatively entitled, The Architecture of Khan Jahan: Its Psychology, Structure and History.