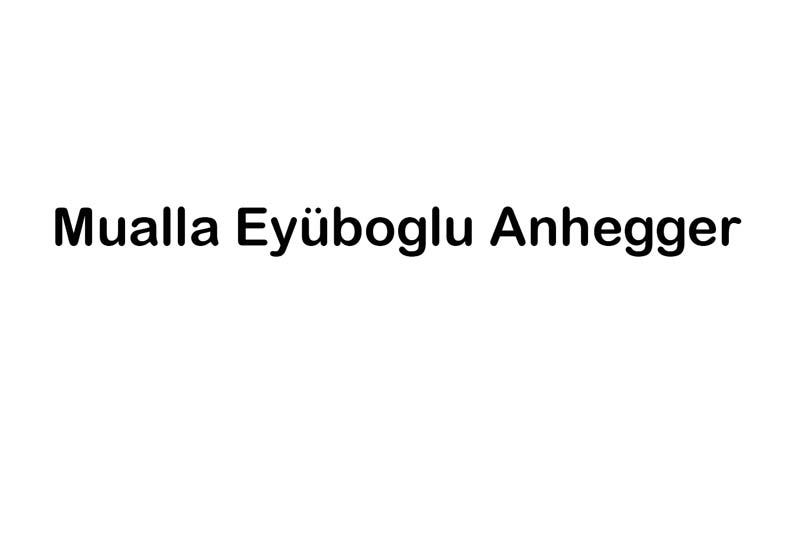 Mualla Eyüboğlu Anhegger was one of the leading women architects working on the Village Institutes in modern Turkey, and served as a role model in this field.  In the 1940s and 50s, these institutes, supported by İsmet İnönü, the prime minister of the Republic of Turkey, and İsmail Tonguç, the General Director of Elementary Education, aimed to instruct people in the fields of culture, fine art, arts and crafts, the social sciences and economics. It also aimed to train teachers, while spreading the Kemalist Revolution to the rural areas of the country.
She was born in Sivas on March 13th, 1919. Mehmet Rahmi, her father, was the governor of Trabzon and a member of parliament. Her brothers, Bedri Rahmi Eyüboğlu, a painter and poet, and Sabahattin Eyüboğlu, an author and translator, were well-known throughout the country.
In 1937, she began her architectural education at the Academy of Fine Arts in Istanbul, where she obtained her degree in 1942. Following her graduation, she began her career in the small village of Hasanoğlan, in Ankara Province, on December, 31st 1942. She designed and drafted the project plans for the local Village Institute, including the facilities for the music department, teachers’ housing and cafeteria, and supervised its construction with her students. Beyond Hasanoğlu, she also designed, supervised, and taught in other Village Institutes across Anatolia, including those in Pulur, Erzurum; Pazarören, Kayseri; Kirpitepe, Edirne; Ortaklar, Aydın; Kızılçullu, İzmir; Çifteler, Eskişehir; Aksu, Antalya; Ladil, Samsun, Beşikdüzü, Trabzon; Arifiye; Sakarya, Gülköy, Kastamonu.
While she was working on the Village Institute in Ortaklar in 1947, she caught malaria and returned to Istanbul. In 1948, she began to work at the Academy of Fine Arts as a research assistant (1948-1952) and at the Turkish Art History Institute. In 1949, she worked with Professor Albert Gabriel, the director of the French Archaeological Institute, and Halet Çambel, a leading Turkish female archaeologist (1916-2014), in Yazılıkaya, Eskişehir, where she participated in excavations between 1949-1951.
In 1952, she was appointed to the Supreme Council of Antiquities and Monument Real Estate as a reporter, and began her career in the field of restoration. Her first restoration project was the Tomb of Barbaros Hayreddin Pasha in Istanbul. In 1953, she began another restoration project at the “Ebülfazl Mahmud Efendi” Madrasah in Saraçhane, Istanbul.
In 1958, she married Dr. Robert Anhegger, a German expert in Turkish studies. With him, she visited several Balkan countries and investigated Ottoman heritage in the Balkans.
Between 1953 and 1960, she worked on the restoration of Ottoman buildings in Edirne, Kayseri, Sivas, Antakya, Mardin and Trabzon.
Among her other important restoration projects are the Üç Şerefeli Mosque, the Old Mosque, the Gazi Mihal Hammam and the Selimiye Arasta in Edirne, completed between 1954-1960; the Trabzon Castle in Trabzon, in 1960; the Buruciye Madrasah, between 1960-1962; the Huand Hatun Complex and the Old Castle in Kayseri, between 1960-1964; the Siyavus Pasha waterfront mansions on the Bosphorus, Istanbul in 1970; the Galata Mawlawi House in Istanbul, in 1973; the Hagia Sophia, the Tomb of Sultan Selim II, the Tomb of Sultan Mehmed III, the Tomb of Murad III, the Tomb of Sultan İbrahim and the Hagia Sophia Fountain (“şadırvan”, in Turkish) in Istanbul, in 1982. From 1957 until 1971, she worked on the restoration team for the Rumeli Fortress. She was in charge of the work from the Zaganos Pasha Tower to the Halil Pasha Tower, and the walled areas next to the Fatih Tower. One of the most significant restoration projects of her career is the Harem Section of Topkapı Palace in Istanbul, conducted between 1961 and 1971.
In 1973, her husband was appointed the director of Goethe Institute in Amsterdam. She moved to Holland with him and retired in 1983. In 2008, she received National Architecture Awards in the category of “Contribution to Architecture”, and died in Istanbul on August 16, 2009.
Architectural Projects:
Restoration Projects:
Publications, 1979-2011:
Articles by Mualla Eyüboğlu Anhegger, in chronological order, 1979-1984:
Books by Mualla Eyüboğlu Anhegger:
Articles on Mualla Eyüboğlu Anhegger, in chronological order, 1988-2011:
--Meral Ekincioğlu, Ph.D.
15 September 2015
Sources:
Candan, Tezcan Karakuş. ”Hasanoğlan Yüksek Köy Enstitüsü.” Bülten, Mimarlar Odası Ankara Şubesi 49 (2007): 21-22.
Çakıcı, Sermin and Figen K. Çorakbaş. “Cumhuriyet Dönemi Mimarlığı, Hasanoğlan Köy Enstitüsü ve Yüksek Köy Enstitüsü Yerleşkesi’nin Tarihçesi ve Değerleri.” Mimarlık Dergisi. Accessed January 20, 2015. http://www.mimarlikdergisi.com/index.cfm?sayfa=mimarlik&DergiSayi=383&RecID=3034.
Dostoğlu, Neslihan Türkün. “Türkiye’de Cumhuriyet’in İlk Döneminde Kadın Mimarlar.” In 75 Yılda Değişen Kent ve Mimarlık, edited by Yıldız Sey, 28-31. Istanbul: Tarih Vakfı Yayınları, 1998.
Karakaya, Ebru. “Türk Mimarlığı’nda Sanayi-i Nefise Mektebi / Güzel Sanatlar Akademisi’nin Yeri ve Restorasyon Alanına Katkıları (1883-1960).” Master's thesis, Yıldız Technical University, 2006.
“Mualla Eyüboğlu Anhegger.” Ulusal Mimarlık Sergisi ve Ödülleri. Accessed January 10, 2015.
http://mo.org.tr/ulusalsergi/index.cfm?sayfa=BO-BYGRF-eyuboglu.