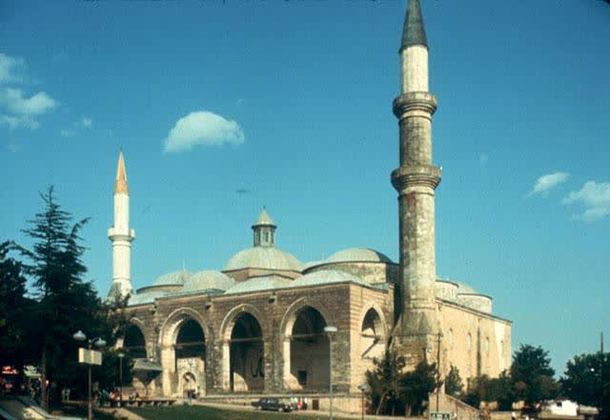 Share
The construction of the Old Mosque of Edirne began in 1402/805 AH by order of Emir Süleyman and was completed under the rule of his brother Mehmed I in 1414/816 AH The inscription plaque (kitabe) above its western portal gives the name of the architect, Hacı Alaeddin of Konya, and the builder, Ömer bin Ibrahim. Built as a Friday Mosque in the market neighborhood of Edirne, the mosque took on its current name following the completion of the new Üç Serefeli Mosque. The Old Mosque was restored by Mahmud I in 1753/1166-1167 AH following damage by earthquake and by fire a few years earlier. More recently, the mosque was restored between 1924 and 1934 and in 1965 after the 1953 earthquake. The small madrasa (medrese) has not survived.

The mosque is composed of a square prayer hall, 49.5 meters per side, preceded by a five bay portico to the north. The prayer hall is divided into nine equal bays -three rows of three- by the four large piers at the center that support heavy pointed arches carrying the nine domes. The center bay of the northernmost row serves as the court of entry behind the main entrance and is crowned with a lantern above the oculus of its dome. Its location also marks the intersection of the longitudinal and transverse axes, defined by the main entrance and mihrab and the side entrances, respectively. Domes along the longitudinal axis are raised on octagonal drums; the transition to dome, achieved with simple pendentives on the six other domes, is elaborated here with use of squinches, muqarnas, and a belt of triangles. The central bay of portico, similarly, is highlighted with a dome and raised cornice among the cross-vaulted side bays. A marble door frame, bearing the inscriptive plaque of the 1753 restoration, occupies the central arch. The row of faucets covered with canopy outside the portico are a contemporary addition.

The interior of the mosque is adorned with painted decoration and large works of calligraphy dating from the second half of the 19th century. The stone mihrab and minbar remain despite damage by fire. The mihrab is unique with its small muqarnas niche placed inside the primary niche. Calligraphic decoration is also employed on the northern façade flanking the marble frame of the muqarnas portal. The fall of terrain west is compensated with a cascade of steps leading up to the western portal, known as the Kuyumcular Kapisi or the Jewelers' Portal, ornamented with red and white voussoirs on its double arch.
The mosque originally had a single minaret rising from the northeast corner of the prayer hall with steps beginning inside the eastern portal. A taller minaret was added outside the northwest corner by Murad II during the construction of the Üç Serefeli Mosque. Its square base ornamented with turrets on the corners and niches on the faces of which one is a fountain, the new minaret has separate sets of stairs for its two balconies. The construction of the building is cut stone with the exception of the porch, added in brick and stone at a later time.