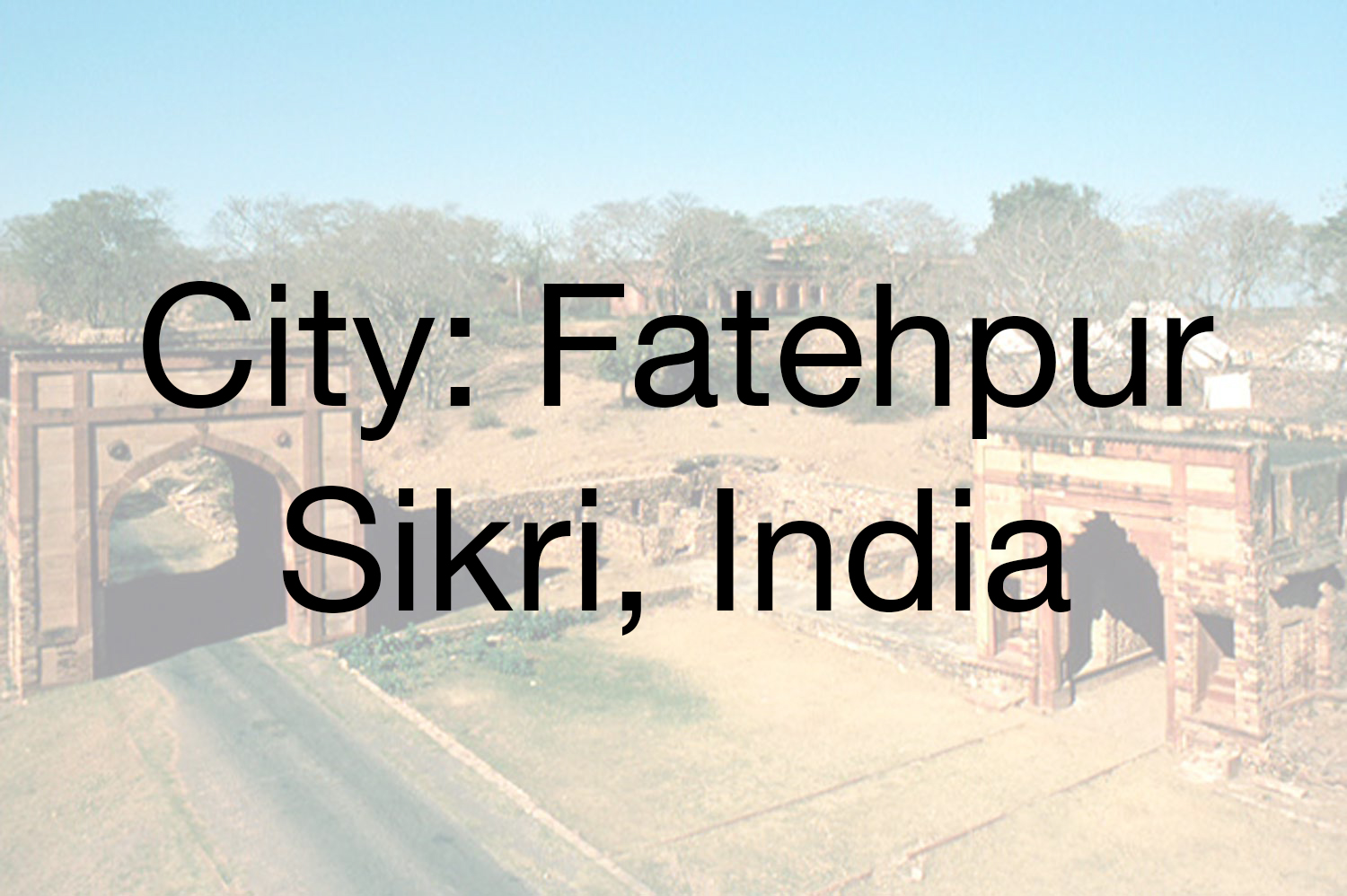 Fatehpur Sikri is a palatial complex, built by the Mughal Emperor Jalal al-Din Muhammad Akbar (reg.1556-1605), son of Humayun and grandson of Babur. The complex, encircled by thick stone walls, extending approximately seven miles, is situated on the ridge of a hill about forty meters in height at the site of an artificial lake. Though the city is most well-known for its role as an imperial residence, Fatehpur was settled by Muslims, who constructed its earliest mosques and tombs, as early as the thirteenth century. Fatehpur Sikri was also the site of imperial commission prior to the construction of the palatial complex. In 1527, to commemorate Babur's victory against the Rana Sangram of Mewar, the city was given the name Shukri, or "thanksgiving" and was the site of Babur's "Garden of Victory", and several stone constructions, including a local bath.
Most of the imperial construction, however, developed together in a smaller domain atop a sandstone ridge within the city's borders after Akbar's move to the city. The earliest building constructed by Akbar at this specific site was a small palace called the Rang Mahal, constructed in in 1569, located beside the Jami Masjid (1573-4). According to Akbar's chroniclers, Akbar moved his pregnant wife to Sikri after its resident, saint Salim ad-Din Chisti, prophesied that the childless emperor would have three sons, though scholars have also argued that Akbar’s 1572 move to the city may have been part of a larger effort to found a new capital for the Mughal empire. In the years following the palace's construction, a bazaar and marketplace, the Chahar Suq, developed between the palace and an area called the Agra Darvaza, as well as the karavansara, which still stands today.  These areas, and the greater environs of Fathpur Sikri were used as an imperial corridor between the city and Agra. The prefix "Fathabad," which became Fathpur by common use, was added by Akbar to the city in I573, when he returned victorious from his Gujarat campaign. Akbar's use of the city was relatively short-lived after 1585, however, when political issues upon his half-brother Mirza Hakim Muhammad's death, likely encouraged his relocation to Lahore.
Sources:
"Introduction". 1985. In Fatehpur Sikri: A Sourcebook. (Michael Brand and Glenn D. Lowry, eds.) Cambridge, MA: The Aga Khan Program for Islamic Architecture at Harvard University and the Massachusetts Institute of Technology, 1-16. 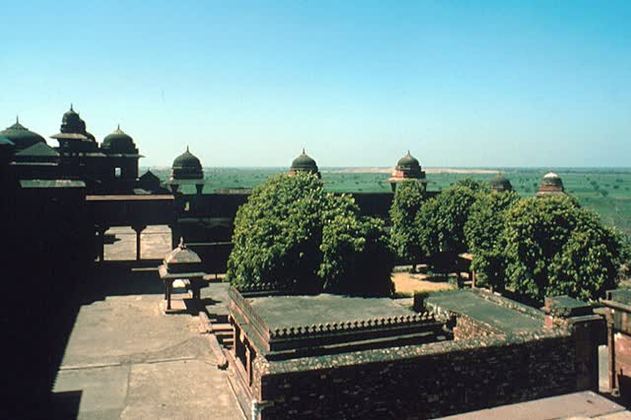 Share
North of the imperial haram sara, and adjoining the northwest corner of the courtyard of the Sonahra Makran, it is a garden known as "Miriam’s Garden," or the zenana bagh. Used by the royal ladies of the palace, it was completely enclosed via rubble walls faced in cement. Its doorway was flanked by a guardhouse at the northwest corner of the Sonahra Makran courtyard.

The garden is based on a traditional chahar bagh garden, laid out on two terraces, of which the upper measures ca. 27 by 28.4 meters, and the lower approximately 19 by 37 meters. Each level is divided by orthogonal walls into two quarters; flowers, plants, and shrubs lined their sides. The garden was originally paved in stone.

On the southeast corner of the upper level stand the ruins of a covered cistern, built below ground level, which held water from the water works at the Elephant Gate. The square tank measures 7.31 meters/side and is 1.22 meters deep. It was used as a swimming and bathing pool for the ladies of the court, and was therefore connected to the haram sara via an underground passage and protected by a roof. All of its openings were curtained. Its roof was supported by an octagonal pillar, 0.55 meters in diameter, which stands in the middle of the bathing pool.

From the covered tank runs a shallow water channel running down the center of the south side of the upper level and passing along an open four-columned chhatri. The water runs from south to north, dividing the terrace in two, passes beneath a second chhatri, and empties into a small fish pond located in the center of the southern edge of the lower terrace. As the water enters the tank, it runs over a wall pierced with fourteen small niches, each 17.5 cm tall. Excavated by Smith in 1981, the fish tank is 0.88 meters deep and 1.44 by 1.77 meters in plan with little steps on all four sides.

To the north of the zenana bagh was a second walled garden measuring 19.1 by 28.24 meters. In ruins, it was completely destroyed in the nineteenth century when a road was built through it.