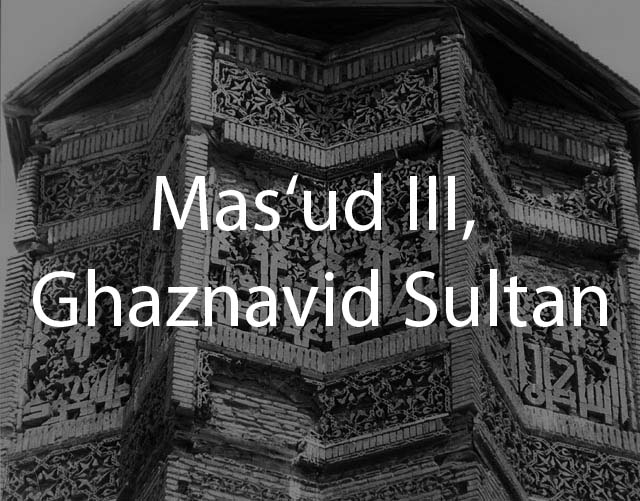 Sultan Mas‘ūd b. Ibrahim was the 12th sultan of the Ghaznavid dynasty. He succeeded his father––Sultan Ibrahim––to the throne in 1099/492 AH and ruled until 1114-5/508 AH. An enthusiastic fighter, Mas‘ūd III kept his armies active in India. The spoils of the war and the temple treasures of India were used to beautify the capital Ghazna in much the same fashion as his predecessors such as Mahmūd of Ghazna [1]. With Mas‘ūd III’s death (in 1115/508 AH), the state began to become weaker and a warfare amongst his sons rolled out, out of which eventually Bahramshah emerged victorious [2].

Although only some of the architecture has survived from the Ghaznavid period, it seems to have been inspired by the Indian tradition alongside other influences [3]. Mas‘ūd III is known for one of the most famous minarets in Ghazni. Built of bricks, it has inscriptions on its side walls [4]. The Italian Archaeological Mission in Afghanistan also excavated a palace attributed to him, which has a Persian poetic text on marble slabs to form dado round an inner courtyard. The poem inscribed in marble praises the sultan and his predecessors as Muslim gāzīs and as heroes connected with the legendary Iranian past [5].

Hillenbrand, Robert. “The architecture of the Ghaznavids and Ghurids.” In Carole Hillenbrand (ed.), Studies in honour of Clifford Edmund Bosworth. Vol. 2. The Sultan’s Turret. Leiden. 2000. 124–206.