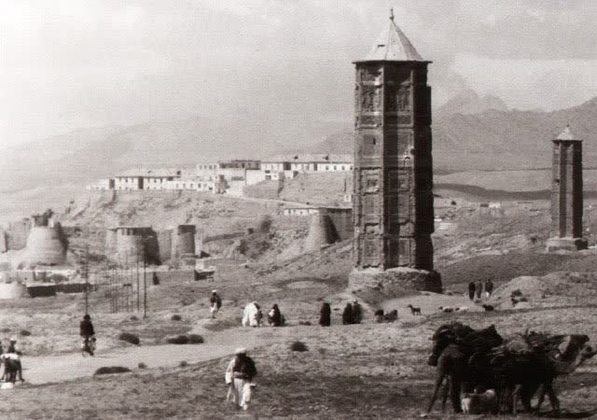 Share
The minarets erected by Ghaznavid sultan Mas'ud III (1099-1114) and his son and successor Bahram Shah (1117-1157) stand 600 meters apart on a plain to east of their capital Ghazni, near the Palace of Mas'ud III (b. 1114). Both minarets once rose to a height over forty-four meters; their cylindrical upper halves have collapsed, leaving their lower stelliform shafts. The lack of archaeological studies has left their function uncertain; they may have been built as victory towers, or as minarets accompanying mud-brick mosques.

The upper cylindrical shaft of the Mas'ud III minaret, recorded in an 1880 photograph, collapsed in the 1902 earthquake. Its stub was removed in the following decades to install a conical roof for rain and snow protection. The remaining lower shaft is an eight-sided star in section and rises to twenty-one meters on a base that is partially buried and eroded. Its diameter is eight meters at the base and seven meters at the top; this tapered profile was continued in the missing upper half, which had a diameter of about three meters at the top. The lower shaft is built of baked bricks, with stelliform wooden frames inserted at irregular intervals to spread the load. It contains a single staircase spiraling around a central core. The brick paving and wooden strips of the staircases have been lost and large sections of steps are missing.

The relief brickwork of the stelliform shaft, which was carved in situ or molded and attached to the revetment, has survived in good condition but with numerous gaps. It is organized into eight decorative bands. The top three bands (6, 7 and 8) contain a knotted kufic inscription, bordered by interlacing star patterns. Below, the decorative bands are composed of eight square or rectangular panels, each spanning the facing flanges of the eight-sided star. The central band here (band 3) features diagonal kufic compositions rendered in brick and terracotta that contain the name and titles of Mas'ud III, along with the names of the prophet, Orthodox caliphs and Imams Hasan and Husayn. Panels inlaid with large floral scrolls are placed above and below (bands 2 and 4), bookended with series of carved panels (bands 1 and 5) featuring interlaced geometric motifs. The four lower panels are bordered with a continuous band containing the Victory sura (Sura al-Fath, 48) of the Quran, written in cursive script on a floral background. The corners of the brick minaret are reinforced with pilasters of triangular bricks.