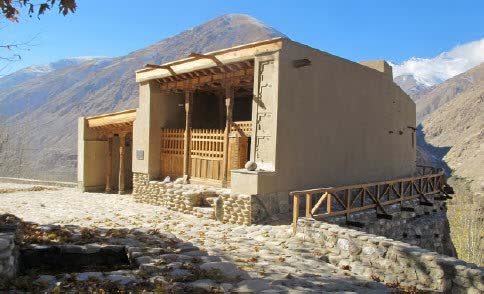 In the context of its wider conservation and training program in Afghanistan and the expansion of project activities to Badakhahan province, in May 2011 the Aga Khan Trust for Culture (AKTC) commence critical conservation works on the historic shrine of Nasir Khusraw located in remote Badakhshsan province. In 2011, a Memorandum of Understanding was signed between AKDN and the Ministry of Information and Culture outlining the scope of works envisaged for the comprehensive structural stabilization of the site and the full restoration of the Shrine and rehabilitation of its landscape.

As it stands today, the shrine (or ziyarat) of Nasir Khusraw is both the funerary structure marking the grave of a great Persian writer and philosopher, and a fine example of vernacular building.

Provisional project visits by AKTC in both 2010 and early 2011 prepared the way for implementation of the project in August 2011. At the onset of the project additional investments were made in the training local project personnel in carpentry and masonry works through the implementation of a pilot restoration project for the Mullah Barat Mosque, located in the Hazrat‐e Sayyed village, which contributed to building local capacity ahead of the full restoration works on the Shrine.

The building is situated on top of a 15m high exposed conglomerate outcrop some 50m above the village of Hazrat‐e Sayyed (coordinates N 36º27.934, E 70º46.969) at an elevation of 2100m above sea level. The site is accessed from the south, across a terrace paved with pebbles that extends some 10 by 40 meters, beside which is a stone lined pool, used for ablutions, fed by a channel from a stream that runs through the village. To the southeast are the ruins of a small mosque, said to have been built in the 1920’s, and to the north is a ruined langarkhana, where food was cooked for religious festivals. Since 2003, a small garden has been laid out to the north‐east, with four terraces divided by stone retaining walls, where visitors to the ziyarat gather. This garden is reasonably well maintained and, on certain days, the terraces are said to be set aside for women.

The fine timber inscriptions found in the ‘mazar’ indicate that the building was transformed in 1109H / 1697 CE. Limited repairs were later again made during the reign of King Abdul Rahman Khan in the late 19th century, when a small mosque was built on an adjacent terrace slightly higher than level of the mausoleum. While the site has continuously been used by Ismaili and Sunni Muslims throughout the 20th century and has been in a general state of disrepair, it suffered significant damage when a bomb was dropped on the site of the mosque built next to the shrine during an aerial bombardment of the area during the Soviet occupation of Afghanistan.

In light of reports on the on‐going deterioration of the site, which included extensive structural weaknesses in the condition of the conglomerate mound upon which the shrine is built and the damage caused to the architecture of the building through seepage of water, it was decided to commence a full‐scale conservation project in 2012.

Upon the completion of project activities in 2013, the Shrine was returned to the custodianship of the local community and a permanent plaque, documenting the site as a registered historic monument was installed in coordination with local authorities and the Department of Historic Monuments. This report provides a background on the Shrine and the conservation activities undertaken by AKTC during the implementation period.