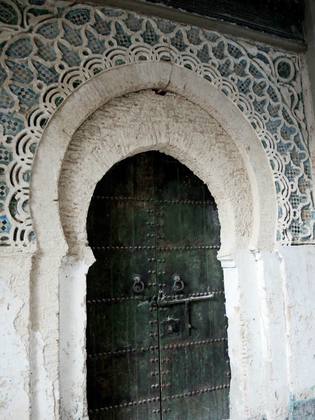 Share
Jami' al-Qasba is next the Dar El Makhzen, and its primary entrance is on rue Ibn Abbou.  The mosque was constructed by Ali Bin Abdullah al-Riffi on the orders of the Mawlay Ismail Ibn Sharif (r. 1672-1727/1083-1139 AH) during the rebuilding of Tangier after the bombardment by the evacuating English forces in 1684.  Significant repairs were made to the structure by Mohammed IV (r. 1859-1873/1259-1290 AH) who enlarged the prayer room, and it was restored again for the visit of Hassan I (r. 1873-1894/1290-1311 AH) in 1889.
The entrance is framed by a large horseshoe arch decorated with elaborate zellij that is visible for the first time since ca. 1921.  As Naïma El-Khatib Boujibar has stated in "The Ports of the Strait" from Andalusian Morocco, it was then

that a nadir of the habous, the regional representative of the endowment administration, had the idea of covering the decorations with unfortunate colors. (p. 198)

It's most notable features is the minaret   The mosque is one of very few in Morocco with an octagonal, rather than square minaret.  Crenelated at the summit, and elaborately decorated with carved stucco, and a mosaic pattern in green, yellow, and blue tiles, the minaret was most likely built by Ali's successor, Pasha Ahmed, who was responsible for a number of octagonal minarets in the Rif region of Morocco.
Recently the mosque underwent a major renovation that took over a year.  It will reopened in early June 2015.