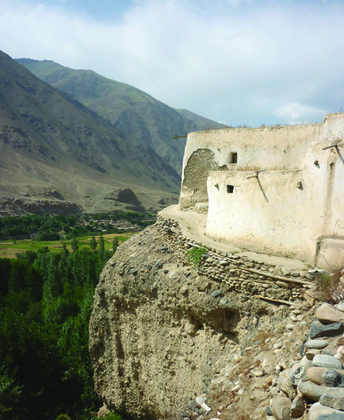 Nasir Khusraw, who is thought to have been born in around 1004, was probably born near Balkh in northern Afghanistan. Members of his family held positions in the Ghaznavid and Seljuq courts, and Khusraw himself until 1046 worked as a collector of revenue for Jaghir Beg, Amir of Khorasan and brother of the Seljuk sultan Toghrul Beg. Resigning from this post, Khusraw set out on a pilgrimage to Mecca and Medina, a 7-year trip that he describes in some detail in the ‘The Book of Travels’ or Safarnama. Khusraw’s account includes descriptions of Jerusalem and Cairo.

The ziarat of Nasir Khusraw is located in the village of Hazrat Sa’id in Jurm district of Badakhshan province of Afghanistan. The village lies on the east bank of the Kokcha River, 4 to 5 hours drive from the market town of Baharak. The building stands at an altitude of 1960 metres, and is accessed from the south, across a terrace paved with pebbles that extends some 10 by 40 metres, beside which is a stone-lined pool, used for ablutions, fed by a channel from a stream that runs through the village. To the south-east are the ruins of a small mosque, said to have been built in the 1920’s, and to the north is a ruined langarkhana, where food was cooked for religious festivals. Since 2003, a small garden has been laid out to the north-east, with four terraces divided by stone retaining walls, where visitors to the ziarat gather. The ziarat comprises a small vestibule, a large vestibule, a mosque and a shrine.

The top of the outcrop, which measures some 10 by 11.5 metres, is almost entirely taken up by the ziarat, around which runs a narrow path on three sides. The sides of the outcrop are nearly vertical on three faces, with a 45° slope near the upper edge on the west face. The natural upper surface of the outcrop rises to the west, and was backfilled with river-stones laid in mud mortar, stabilized in places with horizontal timbers and topped with mud plaster. There are signs of repeated repairs and consolidation of this platform, suggesting that it had been unstable in the past.

The outer walls of the ziarat are constructed of stone and earth, with a traditional mud/straw mix used as both a render and mortar. During the course of the 2010 survey, no major structural problems were detected in the external elevations or roof, although the re-plastering undertaken in 2003 could conceal potential cracks. The south elevation seems to have fared the worst since these repairs; areas of plaster have become detached, exposing the structural earth material at the west end, where six timber rafters were found to be degraded as a result of exposure to the elements. A similar loss of external plaster has taken place on the north elevation, where four rafters are in an advanced state of decay. While the west elevation was in a generally good state of repair, the east elevation had lost much of its external mud plaster. In addition to repair or replacement of the vulnerable timber rafters, there was a need for re-plastering of the exterior of the ziarat, using traditional kahgel plaster (which can easily be maintained by the villagers), to protect the walls from the elements.

The Aga Khan Historic Cities Programme undertook the restoration of the ziarat from 2012-2014. The intervention concentrated on the following four areas: (i) the protection of the rock outcrop, along with the strengthening of the platform that effectively forms the foundation of the ziarat, was critical to the intervention, (ii) rendering of the exterior walls; (iii) conservation of the painted decoration in the interior; and (iv) upgrading of the landscaping, paths and adjoining structures. 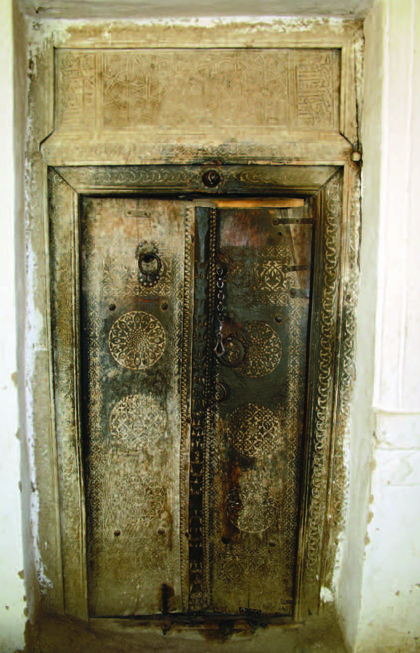