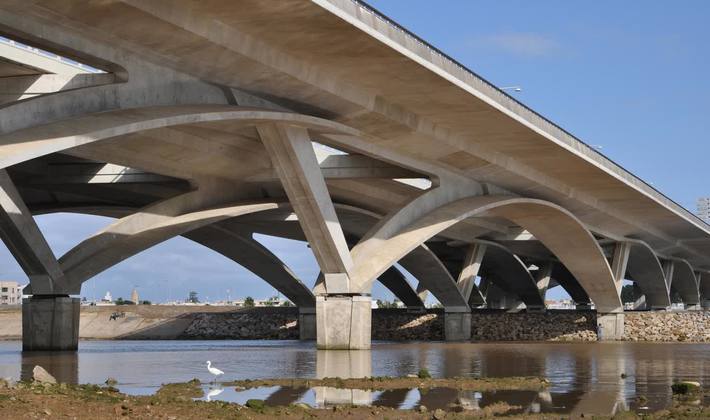 Linking Rabat and Salé to form an urban hub, the project was born out of a new vision of large-scale regeneration, one in which improved transportation and mobility were to be priority components of the larger urban plan, generating the specific infrastructure projects that would have the most significant and immediate impact on the populations of the two cities. With its provision for vehicular, tram and pedestrian links between the two cities, the design still respects the overwhelming horizontality of the built and natural environments, allowing Rabat’s 12th-century Hassan Tower to retain its vertical dominance of the skyline.

The bridge is divided into three separate carriageways on the same level, each supported by structural arches; one for the tramway and the other two for vehicular traffic. Separate decks are maintained over the regular, shorter spans of the Salé viaduct but united as the asymmetrical structure curves into the nautical base bridge on the Rabat side. The concrete supports, in subtly varying arced forms, are deliberately delicate and lace-like in appearance. Besides providing transport connections, the structure also offers an urban roof over the alluvial plain of the Bouregreg River, creating a protected public space for markets and leisure activities. The project is a successful outcome of the combination of exemplary bridge design, infrastructure improvement and urban planning. The Hassan II Bridge has become a new iconic symbol of Rabat-Salé, reinforcing a modern, progressive, twin-city identity and laying a sound basis for future infrastructure development.

“The promise generated by the new Hassan II Bridge anticipates a long-term vision of the cities of Rabat and Salé. Its planning provides opportunities for future development and successfully combines a bridge design with urban planning, landscape and infrastructure improvements. The dynamic complexity of time-based planning is coordinated in multiple layers, providing immediate improvements as well as incremental developments and future opportunities. The ambition of the designer challenges the ordinary boundary of transportation infrastructure and engineering by extending the Bridge beyond the river banks and creating a space for future public activity. The project is a sophisticated and cohesive model for future infrastructure projects, especially in places of rapid urbanisation. The Bridge profile is low, acting as an impressive horizontal extension of an existing flat plateau, presenting respectful views of the Hassan Tower. Built with great care and high quality of detailing and construction precision, the Bridge has a thin profile and elegant, fluid geometry. It is a pivotal icon, reinforcing the identity of the place, and symbolises a new progressive future for the twin cities.”