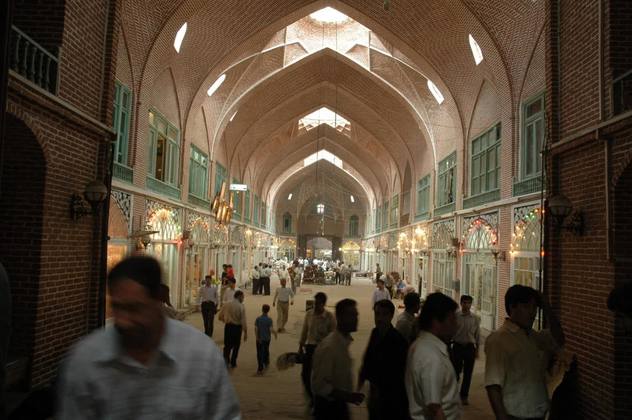 Tabriz Bazaar was officially protected in 1975 and covered by special stewardship measures unti 2010, when it was added to the World Heritage List. The complex covers 27 hectares with over 5.5 kilometres of covered bazaars. By the late 20th century, however, its brick buildings were crumbling due to decades of neglect, and a management framework was established, based on the participation of the “bazaar” community, together with municipal authorities and the Cultural Heritage, Handicrafts and Tourism Organisation (ICHTO). A successful pilot restoration project was decisive in winning over shopkeepers to the advantages ensuing from an overall rehabilitation project that would conserve and revitalise the valuable heritage of the Bazaar. While in the pilot project the government contributed 85% financial coverage and the “bazaaris contribution was limited to 15% of the cost of restoration, the “bazaar” community now provides up to 90% of the funding.

Since 2000, numerous complexes within the bazaar have been rehabilitated with the participation of the owners and tenants. Infrastructure has been improved and public facilities have been built. The sophisticated brickwork throughout – hallmark of the Bazaar – combines both structure and ornament and proved to be a challenging training ground for current experts in restoration who learned in the field from local masons as it was repaired, using traditional techniques. The unique vaulting and domes present intricate geometries and the timcheh (domed nodal crossroads) combine spatial importance with other space-covering geometries. The Tabriz Bazaar is a unique example of an urban conservation and development project in which heritage plays the role of catalyst and it has reclaimed its position as the dynamic urban centre of the city of Tabriz.

“The Rehabilitation of Tabriz Bazaar, with its 5500 shops, is a remarkable example of stakeholder coordination and cooperation to restore and revitalise a unique structure. The architecture of the Bazaar is essentially brick: a singular monolithic material turned into structural and ornamental poetry. The principal expression is the unique vaulting, coordinating light, climate, structure and ornament. The structure that we see dates back 240 years but the site as a place of trade has its origins as far back as the 10th century. It is considered one of the largest brick complexes in the world. What the collaboration, under the direction of the design team, managed to achieve is to return to prominence a historic and living city artefact to the centre of the community’s lives. The project has contributed to the revival and transfer of lost building techniques and skills and has shed light on an important model of this essential everyday typology that challenges us about the quality of commercial space. It is a great reference and example of high-quality architecture and living urban fabric that is still in use as originally intended.”