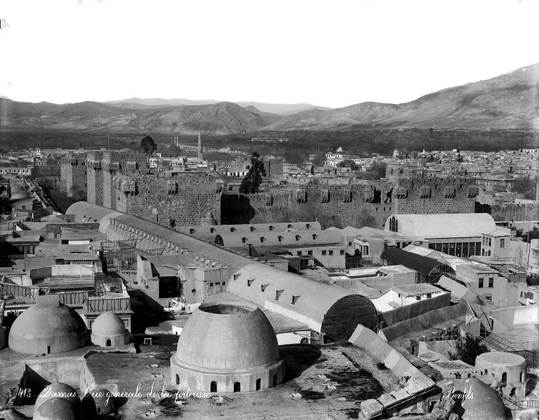 Share
Qala’a Dimashq is a palace and fortress within the Ancient City of Damascus that was declared a UNESCO World Heritage Site in 1979. It is located at the northwest corner of the old, walled medina with the Barada River just to the north. A Seljuk fortress was first built on the site in 1076 by the Turkman warlord Atsiz bin Uvak and finished by his successor Tutush I.

In 1202, responding to the destructive power of the counterweight trebuchet, the Ayyubid ruler Al-Adil I ordered the citadel demolished and rebuilt. Qala’a Dimashq as it exists today was constructed between 1203 and 1216, largely of carbonate rock and basalt. It is unusual for a fortress because it is built on the same level as the city, not on high ground. It is roughly rectangular in shape with 12 large towers and 3 gates.

The Mongols captured Damascus in 1260, and dismantled much of the citadel after suppressing a revolt there. They were defeated the same year by the Mamluks who rebuilt and controlled the citadel until 1516 when the Ottomans defeated them. In the 17th century they began using it as barracks for the Janissaries. Throughout this time, repairs were required at various points due to attacks and earthquakes, though significant structural changes where not made.

In the 19th century the Ottomans added barracks, munitions magazines and other structures inside the walls of the Qala’a Dimashq. Some of the materials were obtained from demolishing upper sections of the citadel. The moats around the walls were filled in and suqs established to serve the barracks. Suq Sarujiyya occupies the space between the river and the fortress walls to the north, while Suq al-Hamidiyya pushes right up against the wall in the south.

In 1925 French soldiers shelled the old city from the citadel in response to the Great Syrian Revolt against the French Mandate of Syria. The citadel continued to serve as a barracks and prison until 1986. As of this writing, the structure is an archeological excavation site and training center of the Directorate-General of Antiquities and Museums. It is also undergoing restoration with plans to open it to the public.