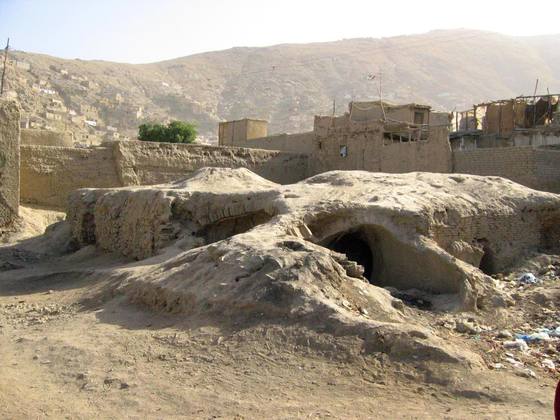 The Shanasazi hammam, one of a handful of traditional bath-houses still visible in the war-ravaged quarters of the old city of Kabul, is located between the Asheqan wa Arefan and Shanasazi quarters, now home to some 7,000 people. The hammam was largely destroyed in the inter-factional fighting of 1993/4.
The building follows a typical configuration of semi-underground rooms grouped around two major brick-domed spaces (which would have been kept at different temperatures), together making up the communal bathing areas. In and between these central spaces are a series of open tanks from which water would be scooped by bathers using the facility. Sourced from a well on the site, water is heated in a large copper vessel situated over an atishkhana (literally, fire-room), a subterranean space under one of the outer walls of the bath-house, where wood fires are lit. Heat and smoke from the atishkhana is led through a hypocaust system of masonry ducts running under the main spaces of the hammam, which serves to maintain the temperature and humidity that is characteristic of such traditional bath-houses.

Restoration of the Shana Sazi hammam and adjacent mosque complex was carried out by AKTC between 2008-2010. Following physical surveys of the remaining structure and identification of the owner of the hammam, property boundaries were defined and a 5-year no-cost lease was negotiated in return for restoration and re-commissioning of the hammam as a community-managed facility. Rehabilitation works started in 2008 with the clearance of debris and waste in order to assess the structure. Excavations revealed two brick domed spaces surrounded by smaller rooms for private bathing and services. Once cleared of waste and rubble, the system of under-floor ducts for heating the hammam was found largely intact. Along with ancillary spaces, the main brick domes have been reconstructed. Internal works included the design and construction of appropriate changing facilities and re-laying of hypocaust flooring and re-building of chimneys and vents. External works included digging of a new shallow well, construction of water storage tanks and installation of a piped distribution system, and drainage connected to the communal sewage system and were completed in 2009 together with the landscaping of the courtyard.

The mosque complex consists of the main mosque building, a summer mosque attached to its south and a smaller two-storey building, which is accessible via a separate courtyard on the eastern boundary. Thick walls on three sides enclose the main prayer hall of the mosque with wooden pillars supporting the timber roofing. Outstanding feature of the main building is its glazed timber framed façade that opens onto the courtyard on the south side.

Structural repair works on this war-damaged complex started in spring 2009, when a detailed survey was undertaken by AKTC in spring 2009. This revealed traces of an older structure, with distinctive carved timber posts along the south façade and plaster niches internally, which had been concealed as part of attempts to modernize the mosque. During the course of repairs to the roof, 25 finely carved timber elements, originally part of an elaborate ceiling, were discovered and have been safeguarded. Badly deteriorated and structurally unsafe, the rescued woodwork of historic value was photographically documented and registered with the Department of Historic Monuments.
A number of timber columns, although badly damaged during previous modernization, retain fine lotus-flower decoration that is characteristic of such mosques in Kabul Old City. After being cleaned and restored, some columns could be re-used internally as wall posts. Several Mughal era marble column bases were unearthed on the site and have been incorporated into new stone paving.

During the course of 2010, repairs to the adjoining summer mosque were carried out. The two-storey structure, which probably dates from the early 20th century, is an integral part of the Shanasazi mosque complex and had been used both for religious instruction and prayer before it was badly damaged during factional fighting in 1993/4. Section of brick masonry walling that had been affected by settlement was reconstructed, incorporating the original timber ties and roof structure. The complex was handed back to the community in January 2011.