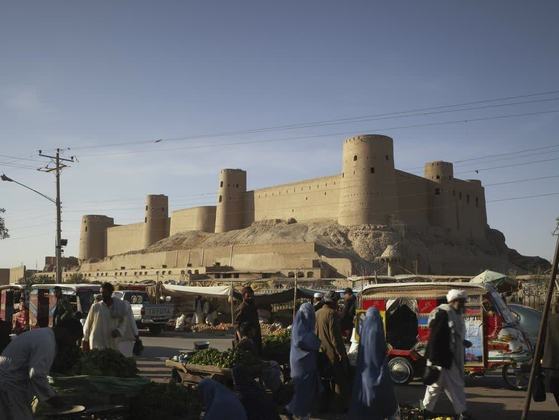 Share
Qala Ikhtyaruddin is central to the turbulent history of the city and is an impressive example of surviving citadels (hisar) in the region. Alexander the Great besieged Herat in 330 BC during his campaign against the Achaemenid Persian Empire. Known at the time as Artacoana, Herat was rebuilt and called Alexandria of Aria, and it is believed that a citadel was first established on its current site during this period. Incorporated into the northern perimeter of a square walled city by the Ghaznavids, the Qala stood witness to the changing fortunes of successive empires before being laid waste by Genghis Khan in 1222. Rebuilt by the Kart dynasty in 1245, Herat was again destroyed by Timurlan in 1381. His son Shah Rukh transformed the Ikhtyaruddin Citadel sometime after 1415, when the fortifications were entirely re-built and new buildings were erected inside its walls. After falling into decline under the Mughals, Herat was the centre of a struggle for territorial control between the Persians, Uzbeks and Afghans. Critical to British strategy during the “Great Game,” its forces assisted Afghans in defending Herat against a joint Russian-Persian assault in 1837. Their fortified positions were located within the citadel, before the city was formally designated as part of the emerging Afghan state in 1857. While Qala Ikhtyaruddin continued at times to play an important defensive role, its earth and fired brick structure fell into disrepair. This prompted the central government to initiate a joint programme of consolidation and preservation with UNESCO in 1976.
The citadel complex extends over 250 metres in length and is 70 metres wide in places. It is divided into two main walled enclosures. The uppermost is roughly rectilinear in plan and is built on a  manmade mound, on which ruins of officers’ quarters and the treasury survive. The lower enclosure is divided from the older, higher section by a narrow street with a fortified entrance to the south, and has a series of stable buildings dating from the 19th century grouped around an extensive courtyard space, all enclosed by lower walls to the south. There are 18 brick towers set within the defensive perimeter walls that are in places two meters thick and rise to an average height of 16 metres over stone foundations. The bodies of most walls are filled with a conglomerate of broken fired bricks in mud mortar, with timber ties used in many places to strengthen the structure.
As part of its Area Development Programme in the Old City of Herat, the Aga Khan Trust for Culture implemented a range of conservation and consolidation activities aimed at safeguarding the historical Ikhtyaruddin Citadel and making it accessible to the public. Based on detailed surveys and an assessment of the state of the outer defensive walling, physical works prioritized the stabilization of critical sections of the citadel deemed to be at high risk of collapse or further deterioration. Work included the stabilization and restoration of several large spaces in the lower citadel, including the construction of an outdoor amphitheater, which has provided much needed space for temporary exhibitions and public events.
All of the perimeter fortification walls and towers in the lower and upper citadel have been repaired and structurally stabilized, with large sections of parapets reconstructed to prevent future damage. A partially collapsed building located at the landing of the tunnel connecting the lower and upper citadels was reconstructed, thus providing additional space for events and gatherings. Repair work on the Timurid era tower, which contained the only remaining section of colour-glazed tile work, required strengthening the existing buttresses and construction of a protective stone-masonry breast wall at the base of the tower. Surviving sections of the original glazed tiles were consolidated, and damage to exposed brick masonry was carefully repaired.
Originally part of the military barracks located in the lower citadel on the western perimeter of the lower courtyard, a building constructed with 14 brick masonry domes located was restored for use an additional exhibition space. Upon completion of the restoration work, an exhibition of photographs and illustrations dating from the mid- to late- 19th century from the collection of the British Library, including monuments and sites in Herat, was permanently installed within this space. Improvements to visitor access and facilities and the restoration of existing structures that have potential for adaptive re-use ensured that the site would be used for appropriate cultural and educational activities in the future.
In parallel with AKTC’s conservation activities, the German Archaeological Institute (DAI) conducted archaeological excavations within the citadel. During the course of this work, plans were formulated for the establishment of a museum and conservation workshop on the site. The aim was to enable the local department to undertake basic conservation of existing objects in the collection and to exhibit key items, including manuscripts that were stored elsewhere in the city. In collaboration with the DAI and local authorities, part of AKTC’s restoration activities focused on conserving and upgrading an existing section of buildings in the lower area of the citadel for use as a permanent museum, archive and storage area for artefacts.
The conservation of Qala Ikhtyaruddin has been one of the largest preservation projects in Herat since the 1970s, offering an opportunity for the development of skills of Afghan professionals and craftsmen and the generation of significant employment. The project generated almost 70,000 man-days of work for skilled craftsmen and unskilled labour. In the context of increasing pressure for wholesale redevelopment of the traditional fabric of the Old City, the restored citadel will serve as an example of the potential for adaptive re-use of public historical structures for cultural and educational functions.
Source: Aga Khan Trust for Culture