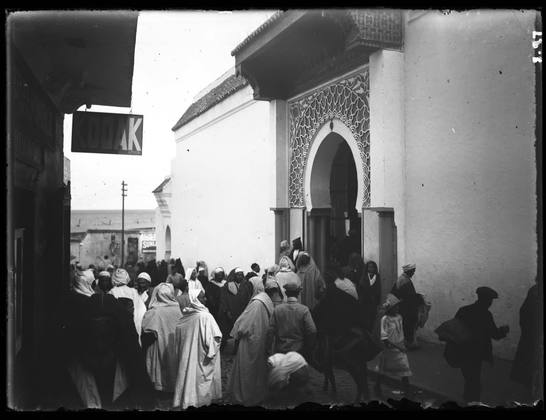 Share
The Great Mosque of Tangier is a nineteenth-century construction that stands in what was once the center of the medina of Tangier. The site of the mosque was formerly the home of several significant religious buildings from various civilizations that previously occupied Tangier, dating back originally to a fifth century Roman church. After the Muslim conquest of Tangier in the eighth century, the church was converted to a mosque by the Marinid Dynasty and remained so until the late fifteenth century. The mosque was replaced by a church during the centuries in which Tangier was under Portuguese and English rule. After Moulay Isma'il recaptured the city for the 'Alawi dynasty in 1684, the church was once again transformed into a mosque. Sultan Sulayman completely rebuilt the mosque in 1815 due to its poor physical condition, creating the building that stands in Tangier today.

The mosque is rectangular in shape, its longitudinal axis rotated forty-five degrees counter-clockwise from the north-south meridian to account for qibla orientation. It is approximately 34 meters long along its north-south axis and 30 meters wide along its east-west axis. The mosque is bounded by thick exterior walls that structure the hypostyle-type prayer hall and courtyard within. The mosque is divided by arcades into a grid in plan of seven rows by seven columns. The main entry to the mosque is in the center of the northwest elevation of the complex, on axis with the mihrab positioned in the center of the southeast wall. Secondary entrances to the mosque are located in the long northeast and southwest walls on axis with the center of the courtyard. The minaret is located in the northwest corner of the mosque.

Upon entering the mosque from the main entry in the northwest wall, the first row of arcades is covered, and interior walls perpendicular to the exterior mosque wall separate the central three bays of the first row from the two outermost bays to each side of the entry. Passing into the second row of arcades, the interior walls framing the entry and the roof both end as the courtyard of the mosque begins. The courtyard is three bays long and three bays wide, or 11 meters wide and 13 meters long, and surrounded by covered arcades on all sides. An ablution fountain is located at the center of the courtyard. Beyond the courtyard is the covered prayer hall, which is seven arcade bays wide and three bays long, or 30 meters wide and 14 meters long. At the point where the central arcade intersects the qibla wall is the mihrab. To the east of the mihrab along the qibla wall are the library and the imam's room, and to the west is the funeral room. All of these rooms are located behind the qibla wall and thus outside of the main footprint of the mosque. The annexed rooms are accessed exclusively through doors in the qibla wall from within the mosque, not from the exterior.

The walls of the mosque are covered in white stucco, with green and orange ceramic tiles applied to the surfaces of the portals and the minaret as decoration. The roof of the mosque was similarly completed in green ceramic tile. The main entry to the mosque is monumental in scale, with an opening in the form of a rounded horseshoe arch. The arch is decorated with green ceramic tile up to the level of the impost, after which unadorned white stucco traces the shape of the horseshoe over the opening. The spandrel between the white face of the arch and the green ceramic cornice is decorated with intricate orange and green tilework forming geometric patterns. A projecting second cornice extends the green tile roof out over the sidewalk and the two steps that lead up to the arched threshold, creating a shallow porch at the point of entry into the mosque.

The minaret contains similar decorative motifs, also incorporating green and orange ceramic tilework into the faces of its square main shaft. The main shaft, with a square plan of approximately four meters by four meters, rises to four-fifths of the height of the minaret, and is capped by stepped merlons. At the level of the merlons, an open air gallery surrounds a second smaller square shaft that rises one fifth of the total height of the minaret, culminating in a pyramidal cupola and a metal finial. This structure and proportion is typical of 'Alawi minarets in Morocco. The brick minaret is completely covered in white stucco, except where the colorful tilework is inset on each elevation. The tilework is used as in infill into the blind arcades that are defined in relief on each level of the shaft. Openings that penetrate into the interior of the minaret only occur on the third and fifth levels of the structure, and even they are mediated by stucco screens with a small-scale lozenge pattern as to appear a continuation of the geometric patterns found in the tilework of larger blind arcades.

The mosque was socially significant in the nineteenth century as an urban hub, due to its central location near to the inner market of the medina, and the variety of services that it provided to the city. Extensions of the mosque built across the street from the main structure contained a hospital for the mentally ill, the house of the Qadi where court was held, two schools, and a house for washing the dead. Creating spaces for these programs in the immediate area of the mosque allowed the mosque to become a locus of social change as well as a place of worship.

After the occupation of Morocco by the French in the early 20th century, the Great Mosque of Tangier declined in cultural importance. In the 1920s, the French constructed a nouvelle ville (colonial town) in Tangier that relocated the city center away from the Great Mosque, relegating it to a position of historical, but no longer civic, significance. The mosque was extended in 1962, and fully restored beginning in 2001.

SOURCES:
Miller, Susan Gilson. 2005. "Finding Order in the Moroccan City: The Hubus of the Great Mosque of Tangier as an Agent of Urban Change." Muqarnas XXII: 265-283.

Boujibar, Naïma El-Khatib. "The Ports on the Strait" 192-202 in Mazzīn, Muḥammad, and Imḥammad Bin ʻAbbūd. Andalusian Morocco: Discovery in Living Art. [S.l.]: Museum With No Frontiers, 2001.