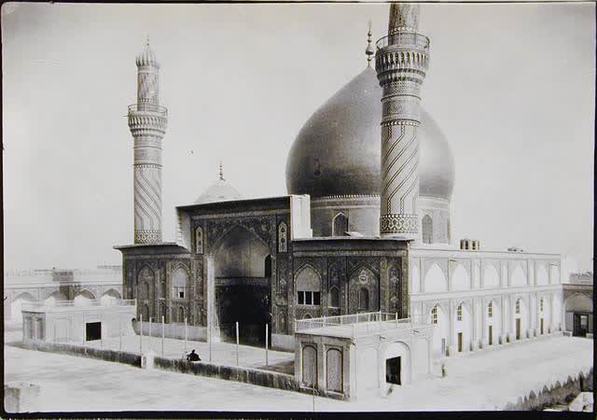 Share
The tenth and eleventh Imams of the Shi'ite faith, Ali al-Hadi (d. 868) and his son Hasan al-Askari (d. 874) were buried in their house on Abi Ahmad Street, near the mosque of Caliph al-Muta'sim. Also buried under the dome are Hakimah Khatoon, sister of Imam Ali al Naqi, and Nargis Khatoon, the mother of Imam al-Mahdi. The shrine centered on their tombs was first developed in 944-45 (333 A.H.) by Hamdanid ruler Nasir al-Dawla (929-967), and by the succeeding Buyid dynasty. The town of Samarra subsequently gained importance as a center of pilgrimage.

The plan of the shrine is centered on the tombs of the imams in a square tomb chamber, approximately fifteen meters square, topped by the iconic golden dome. At the center of each wall of the tomb chamber is a door that leads to a hallway that surrounds the four sides of the central space. Each side of the inner walls of the hallway has two niches that flank each door leading into the central tomb chamber. Each side of the outer walls of the hallway has four equidistant niches, two flanking each door. The south door of the tomb chamber is on axis with the portal of the shrine. The shrine is centered along the north wall of an arcade that encloses a courtyard around it on its east, west and south sides. A large portal centered into the south outer wall of the complex is on axis with the portal of the shrine and the tombs within, and marks the entrance into the courtyard.

The large pointed arch portal recess is set in the center of the south elevation, which is shaded by a grand covered portico (added at a later date) that is supported by ten slender white columns. The central section of the tripartite portico is raised higher to accommodate the large shrine portal. The pointed arch door is set in the center of the back wall of a deep recess that is approximately twice the height of the door itself. A blue tiled inscription band wraps the three-sided recess above the door.

Two minarets at the corners of the southern elevation add emphasis on the façade facing Mecca. These identical minarets are thirty-six meters high and were originally decorated with a spiral motif (visible in early photographs), but they were redecorated during an early twentieth-century reconstruction, close in time to the construction of the gold dome. The current dome, most recently damaged in a bomb attack in February 2006, was built in the 1905 reconstruction. It rests on a cylindrical drum punctured by equidistant large pointed arch windows. The sixty-eight meter high pointed dome is also sixty-eight meters in circumference and was covered with 72,000 gold pieces.