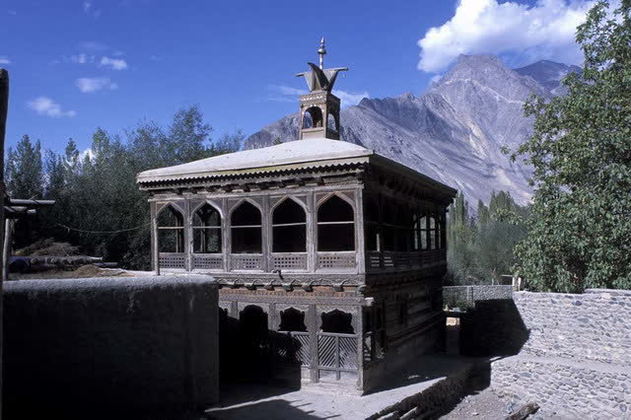 Khilingrong mosque is located in Shigar town of Shigar valley at an altitude of 2300 m. It is in the vicinity of the restored Shigar Fort. It was constructed in the earlier years of 17th century which makes this structure more than 400 hundred years old. Khilingrong mosque is a unique two storey wooden building, with the  ground floor used in winters and first floor mainly in summers. The mosque was built in the traditional way using stone and timber, with cribbage columns, and exquisitely carved motifs with geometrical and floral patterns in abundance.  As was the tradition, emanating from the region’s Buddhist influence, the mosque is topped of with a Tibetan Tower.

The structure was in an advanced state of deterioration when the Aga Khan Cultural Service of Pakistan began much needed restoration work. The philosophy of ‘minimum intervention and maximum retention’ guided the conservation project with the only major restoration work undertaken being the repair of the roof, which had suffered from the extreme weather conditions of northern Pakistan. The community-based conservation approach has now revived traditional construction and craft techniques through a specialized skills development programme to train the local community and artisans.  Not only has the project reinstated the religious function of the building, it has also reinvigorated an important public space for day-to-day social interactions among the community.

The total covered area of the mosque is 100 m². Building restoration was started in April 2001 and it was completed in Oct 2002. Out of total restoration cost of US$ 32,369, Government of Pakistan  provided US$ 21,027, while Aga Khan Cultural Service Pakistan provided technical assistance worth US$ 10,000 and community contribution was US$ 1,342.  The project won Award of Merit in the UNESCO Asia-Pacific Heritage Awards of 2012.