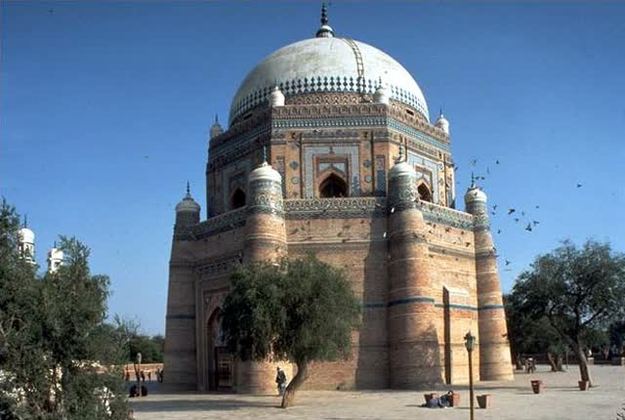 Share
Still subject to historical debate, the Mausoleum of the Suhrawardia saint Shaykh Rukn al-Din Abdul Fath is said to have been first built by Ghiyath al-Din Tughlaq (1320-1325) for himself, yet later dedicated to the saint by Firuz Shah Tughlaq (reg. 1351-1388) at the request of Shaykh Sadr al-Din Muhammad, his adopted son and spiritual successor. The sarcophagus of the saint was then supposedly shifted from the Baha'al-Haq Tomb to the present day Mausoleum with ceremonies, as per textual accounts by Nur Ahmad Faridi. Historians cite the vacant platform between the two rows of graves at the Baha'al-Haq Tomb as evidence of the reburial of the saint at the present day site.

Also known as the Rukn-i-Alam or the pillar of the world, this shrine has the second largest dome in the world after Gol Gumbad in Bijapur, India. It is the most prominent feature on the Multani skyline. Today, it stands within a larger enclosure at the northwestern corner of the high mound on which the fort is situated and flanks the western wall of the Bab-al-Qasim or the main gate leading into the historic city.

It was British Army officer and archeologist Sir Alexander Cunningham who first recorded the tomb in mid nineteenth century, giving detailed description of its architecture and essential features along with actual measurements. The mausoleum sits in the center within a rectangular enclosure measuring about eighty meters east to west and eighty-six meters north to south. It is octagonal in plan, with an entrance vestibule facing south. At each corner of the octagon is a circular buttress that slopes towards the top, crowned by a small domed pinnacle. The second level is set in from the first, leaving a narrow balcony. Its corners are crowned with miniature turrets surrounding the base of the dome. While openings at the lower levels are punctured through the thick exterior wall on the east, south and north faces of the octagon, the west face has an elaborate mihrab set in a deeply recessed arch. Intricate floral carvings and Quranic inscriptions including the Ayat al-Kursi, are carved on wooden bands decorating the mihrab.

The mausoleum is constructed of burnt bricks, reinforced by shisham timbers. The exterior is elaborately ornamented with interlocking stars and hexagons rendered with dark blue, azure and white, glazed tiles floral tile panels, carved terracotta and string courses. The dome has a glazed surface and is crowned with a finial.

A major restoration of the mausoleum was commissioned by the Government of Punjab, Lahore in the 1977 to architect Muhammad Wali Ullah Khan. His work was awarded the Aga Khan Award for Architecture for restoration and conservation in 1983.