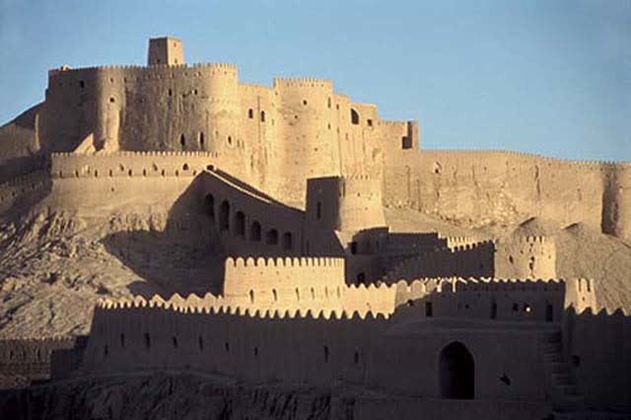 The Arg-i Bam (Citadel of Bam), established in the Sassanian period, is situated atop an artificial hill in the northwest quadrant of the old city of Bam. This artificial hill, originally created from debris, elevates the citadel approximately 5 meters above the surrounding urban fabric. The citadel complex occupies an area 315 meters wide along the east-west axis by 270 meters long along the north-south axis. Bounded on the north by the river, by steep cliffs to the east, and by gardens and residential neighborhoods to the north, northwest and south, the Arg-i Bam was optimized for both self-sufficiency and protection.

Security was a major concern in the Arg-i Bam: the citadel complex was surrounded by deep trenches and four encircling and dividing defensive walls. The "first" wall enclosed the largest area, including the Arg proper and the old city. Forming the principal urban element of Bam, this wall surrounded the city's working-class neighborhood (rabaz) on the south, east, and west, and ringed the Arg to the north. This wall was eighteen meters tall at its highest points, with a breadth of six meters at its widest. Thirty-eight watchtowers, located every 30-40 meters along the wall, patrolled its length. The "second" wall begins at the west end of the Arg, in the steepest part of the cliff, enclosing the military stables and certain patrolling facilities on three sides (west, south, and east), while the "third" wall closes the stables from the north, dividing them from the military barracks (canteen, armory, and residence of the military chief), and continues east to divide the city's shahrestan from the Arg. North of the third wall, the "fourth" wall further encloses the main core of the citadel complex, that of the governor's residence and its associated buildings. The citadel is thus subdivided into two major sections, residential and military, separated by a wall tentatively dated to the Seljuk period. The citadel also contains three wells, located along a single north-south axis. The residential complex contains the governor's residence, baths, a detached watchtower, the chahar fasl ("four seasons") palace, the prison, the dungeons, and one of the citadel wells. The military section comprises the commander's quarters, barracks, stables for 200 horses, and two wells.

The main entry portal of the citadel is found along the third wall, just north of the middle-class neighborhood (shahrestan) and east of the military stables which are encircled by the "second" wall. Entering through this portal, one continues north up a steep incline to the gateway in the "fourth" wall. Turning to the west from this gateway, one enters the two-level military barracks, with the 31.5 meter deep well in its southeast corner. The barracks, also called the armory, were used for artillery storage. Proceeding south from the barracks, one enters the military stables with its rock-lined well (28 meters deep, also in its southeast corner). One of the largest structures in the complex, the stable measures 60 x 70 meters, and dates from the Mughal period (1220-1380). The stable courtyard is lined with mangers, and the stables themselves are topped by a total of 46 domes.

Returning to the gateway in the "fourth" wall and turning east, one arrives in the residential complex of the citadel. To the north and east of the gateway is the residence of the governor; moving along a north-northeast axis, one passes the main (detached) watchtower on the east and then arrives at the elevated platform supporting the chahar fasl. Just north of the chahar fasl is the third well of the citadel complex, estimated to be 40 meters deep. Northwest of this well, one looks over a steep cliff and a wall containing a tower (perhaps the original northern wall of the Arg) to another residential neighborhood, estimated to be a post-medieval addition to the city. This neighborhood, called the Konari neighborhood, falls within the largest, or "first," of the city walls, and possibly formed part of the rabaz of Bam.

The governor's mansion was constructed at the highest point within the Arg-i Bam, next to the complex watchtower. Heavily renovated during the Safavid (1501 - 1722) period, the mansion consists of a two-story main iwan with summer and winter wings. The prison and dungeon were located beneath the governor's residence, rather than in the military section. This dungeon and the chahar fasl, (a specifically Iranian building type, the "four-seasons building") are considered to be the oldest buildings within the Arg-i Bam.

The detached watchtower is four-sided and decorated with shallow rectangular insets and three levels of windows. Below the watchtower platform is a chamber with an elevated entrance accessible via a staircase. The existence of other rooms within the watchtower suggest that the tower had other functions beyond that of security.

Located next to the watchtower is the chahar fasl, which is square in plan and domed above. The chahar fasl is a three-level structure, which is partially built into the cliff. On its upper (above-ground) story, supported on a platform, additional rooms are linked to each corner of this square plan by vaults; windows on all four sides allow for cross-breezes, and it may have been used as a spring/summer guest house. This plan formation (a square plan next to a tower) is also the prototype for a Zoroastrian fire temple, which strongly suggests a pre-Islamic origin for the structure. This chahar fasl is estimated to have been rebuilt in the Safavid period atop the ruins of an older structure, which is now its supporting platform. On two of its four sides, the platform is connected, via a single staircase, to the two-story basement; the lower basement is smaller than the upper. The brick (khesht) in the basement of the chahar fasl are larger than those used in the chahar fasl building itself, also suggesting an older origin. One of the basement rooms of the chahar fasl, with a khesht ceiling, is assumed to have originally functioned as a stable.

Natural disaster has recently struck Bam: shortly after the devastating earthquake of 26 December 2003, which leveled the city, the Arg-i Bam was inscribed on the 2004 World Heritage List, and added directly to the World Heritage in Danger List. Prior to the earthquake, the fortress had possessed the distinction of being the largest adobe building in the world, recognized for its unbaked mud brick (khesht) and poured mud wall (chineh) construction.

Pottinger, Henry. Travels in Beloochistan and Sinde; accompanied by a geographical and historical account of those countries, 219-230. London: Longman, Hurst, Rees, Orme, and Brown, 1816.