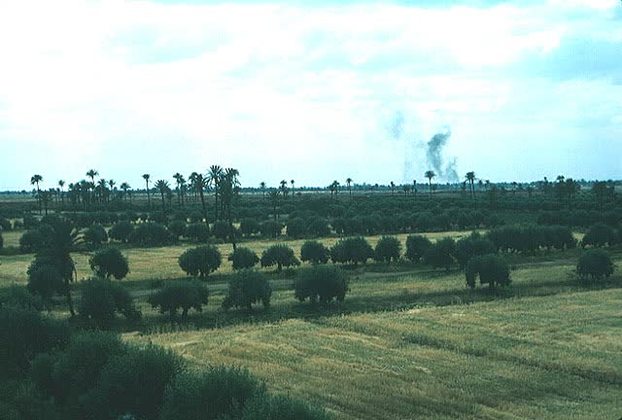 The word "agdal" is a Berber term that means "meadow enclosed by a stone wall." It is said that the Agdal Gardens in Marrakech were so named because visiting Berber Tribes from the Atlas mountains associated their native panoramas of green meadows framed by tall mountains with the walled landscape of the urban gardens.

The Agdal Gardens are essentially rectangular in shape, with a relatively small rectangular section removed at their northwest corner. The longitudinal axis of the site is its north-south axis, rotated counter-clockwise from the north-south meridian. The gardens are 3.1 kilometers long and between 1.2 and 1.4 kilometers wide. The rectangular area that is cut out from the northwest corner of the rectangular parcel measures 620 meters long and 450 meters wide. The vast majority of the land within the Agdal Gardens is given over to productive orchards. Various trees and bushes are planted in grids whose rows range between five and ten meters wide, depending on the type of tree or plant. The entire site is subdivided by a network of paths into a patchwork of smaller gardens, within which one species of plant is cultivated; this strict rationalism in organization is typical of the Hispano-Mauresque productive garden. All paths within the garden are lined by a single row of olive trees planted ten meters on center. Beyond this edge of olive trees are orchards of lemon, cypress, olive, and orange trees.

The Agdal Gardens are irrigated by two large reservoirs that sit approximately 820 meters to the north of the property's southern edge. The basins are filled via a network of underground channels, or khettara, built in the early twelfth century during the reign of Almoravid sovereign 'Ali bin Yusuf (1105-1143/499-537 AH). The larger of reservoir is the Basin al-Manzeh, which is 205 meters long and 180 meters wide. The architecture of the elevated basin and its perimeter terrace was designed by Abu Yaqub Yusuf, who later used this reservoir as a model for similar basins in Rabat (1171) and Seville (1171). Adjacent to the southern edge of the Basin al-Manzeh is a simple pavilion known as the Dar el-Hana. This open-air structure, measuring eighty meters wide and thirty meters long, was built as a loggia within which the king could entertain guests overlooking the impressive expanse of water in the neighboring basin. It was also used to observe the military training activities that were frequently conducted in the Basin al-Manzeh, including swimming and boating drills.

The Agdal Gardens were listed as a UNESCO World Heritage Site in 1985, as a part of the Médina of Marrakesh.