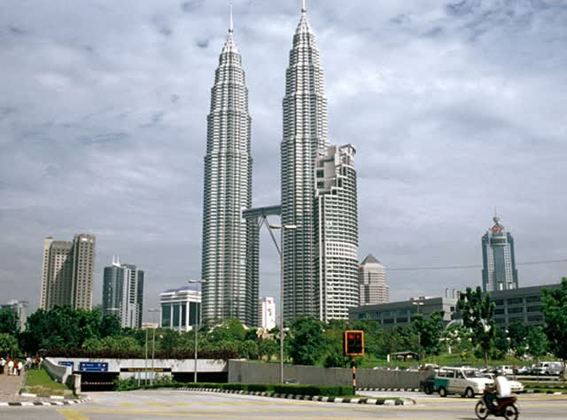 Share
Recipient of the Aga Khan Award for Architecture in 2004.
The Petronas Towers are the centrepiece of the mixed-use Kuala Lumpur City Centre (KLCC) complex, set in the heart of the commercial district of the city. Rising 452 metres, the towers were certified the world's tallest buildings by the Council of Tall Buildings and Urban Habitat in 1996. The complex is at the forefront of technology, with a form derived from an Islamic pattern, and extensive use of local materials. The towers have become a popular example of contemporary architecture in Malaysia, and their elegant form makes them the country's most significant urban landmark.

In 1981 the Malaysian Government undertook the development of a 40-hectare site in the heart of Kuala Lumpur's emerging business district -- the 'Golden Triangle'. In 1991 an international competition was held for the design of the office tower complex and was won by Cesar Pelli & Associates.

The project design is based on the concept of two interlocking squares that form an eight-pointed star modified by placing eight semicircles in the angles of the corners to create more floor space. Each tower rises eighty-eight storeys and provides 218,000 square metres of floor space, including an additional circular 'bustle' or annex forty-four storeys high. The towers taper at six intervals, with the walls of the upper levels sloping inwards. Both towers are topped by a conical spire and a 73.5 metre high pinnacle.

The structure supporting each of the towers comprises a ring of sixteen cylindrical columns of high-strength reinforced concrete, placed on the inner corners of the star-shaped plan to form a 'soft tube', with the columns linked by arched ring beams, also made of structural concrete. The columns are nearly 2.4 metres in diameter at the base of the building, but taper as they rise through the floors, as well as sloping towards the centre of the towers. At the centre of each tower is a square core, which contains elevators, mechanical shafts and other services, with beams extending out to the perimeter columns. The core occupies 23 per cent of the floor plan -- a relatively low ratio in comparison to other skyscrapers. The foundation system of the towers consists of a 4.5 metre thick piled raft supported on rectangular friction piles varying in depth from 40 metres to 105 metres.

The towers are connected at the forty-first and forty-second levels, 170 metres above street level, by a sky bridge, enabling intercommunication between the towers. The structural design of the sky bridge was complex because it had to accommodate differing movements from each tower. The towers are also joined at their base to form a six-level retail and entertainment complex with a central atrium. From the atrium, two 'streets', lined with over 300 shops, cafés and restaurants, extend along opposite axes. In addition, the complex includes an 880-seat concert hall, an art gallery, a specialized library and an interactive science discovery centre, as well as a four-storey underground car park for 5,400 cars.

Throughout the complex, automatic controls and advanced communication systems reduce energy consumption and promote convenience of use. One such system controls vertical transportation, which is provided by double-deck lifts capable of carrying twenty-six people per deck. The integrated energy-conservation concept of the towers is based on an innovative 'cool-recovery' system, which uses heat from exhaust air to power the cooling of outside air as it enters the building. The system reduces the amount of energy required to air condition the building by 50 per cent.

The Petronas Towers complex combines modern technology with a sense of cultural identity. It has also introduced new architectural standards to Malaysia in terms of design, construction and technology.

Jury Citation:
"This project has received an Award because it represents a new direction in skyscraper design, featuring advanced technology while symbolizing local and national aspirations. The project embodies several innovations, ranging from the use of unusually high-strength concrete to facilitate a soft-tube structural system, to an inventive vertical transportation concept and the integration of cutting-edge energy conservation systems. The success of this project lies in the manner in which it incorporates these technological innovations while generating a slender form that responds poetically to the broader landscape. The simple geometrical pattern that generates the plan not only uses space efficiently to maximize exposure to natural light, but also creates a rich spatial expression. The building has become an icon that expresses the sophistication of contemporary Malaysian society and builds on the country's rich traditions to shape a world city."