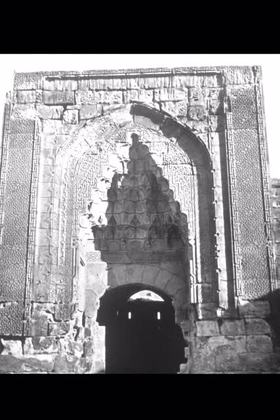 Share
The Sultanhani outside of Kayseri was commissioned in 1232 by Alaeddin Keykubad I. It is the second largest Seljuk caravanserai in Turkey, encompassing 3,900 square meters.

As a fortified way station along the trade route, it is built of massive stone walls with only one entrance. This entrance is set in the thick wall of the caravanserai below a muqarnas niche. From the entrance one passes through the thickness of the walls into the courtyard, in the middle of which is a masjid. The masjid is set on arches above a fountain, with the prayer hall on the second floor, reached by a double stairway. The arches of the masjid are decorated with intertwined serpents, and geometric carving covers all the exterior corners. Animal motifs are common in Seljuk decoration, and are also seen in the Kayseri Sultanhani as drain spouts carved as lions. The khan is undecorated except for the main entrance, the masjid, the entrance into the inner covered hall, and a bead of stalactite molding around the inside of the roof surrounding the courtyard.

The winter hall is 30 meters wide by 40 meters long, divided into 5 aisles that run the length of the hall as 7 vaulted spaces which cross the hall transversely. The entrance is marble and opens into the six meter wide central aisle flanked by two naves. At the center is a dome which lets in light and air, expressed on the exterior as a conical pyramid.

Stierlin, Henri, and Anne Stierlin. Turkey, from the Selçuks to the Ottomans, 240. Köln, Germany: Taschen, 1998.