Share
Qasr al-Hayr al-Gharbi was a rural palatine residence and agricultural compound located approximately 37 miles west of Palmyra in the Syrian desert. The Umayyad caliph Hisham ibn ‘Abd al-Malik constructed the main residence between 724 and 727. Like its sister site, Qasr al-Hayr al-Sharqi, the settlement features an impressive irrigation system complete with a complex network of underground canals originating at a Roman dam (harbaqa) about ten miles to the south. An outer wall measuring 1,050 by 442 meters and constructed of mud brick over a masonry foundation protected this arable land and the rest of the settlement that includes a khan, a palace and a bathhouse.
The palace:
The palace at Qasr al-Hayr al-Gharbi was a square building with a large courtyard at the center. The exterior consists of a stone foundation; over which is an area of baked brick and then mud brick. The outer walls measure approximately 70 meters per side and have corner towers in all corners except for the northeast corner, which incorporates the remnants of a rectangular tower belonging to a Byzantine monastery dating from the sixth century CE. Three other semicircular towers buttress the center of the northern, western, and southern walls.
At the center of the eastern facade, two half round towers flanked the main entrance portal. This portal and the two towers to either side were lavishly decorated with stucco friezes, which included blind arcades enclosing figural sculpture as well as vegetal and geometric patterns. At the time of excavation, the stucco had collapsed and was pieced together by the excavation team and installed at the entrance of the National Museum in Damascus where it still stands today.
The gate extends into a corridor that opens into a portico and then a central courtyard by way of a small step. The portico envelops the courtyard on all sides. Suite-like areas, similar in plan and consisting of a large central room with smaller rooms to either side, surround the court on two stories. Frescoes adorned two rooms of the palace, painted onto the floor.
The caravanserai:
Built in mud brick over stone, the caravanserai measures almost 55 sq meters. It is organized around a central courtyard that continues into a 2.5-meter deep portico and is surrounded by three long rooms that each extends the length of the northern, western, and southern walls and six individual rooms to the east. Its main entrance is situated at the center of this façade. In addition, both the northern and southern exterior walls expand outward at the northeast and southeast points of the building. To the north, this extension provides a drinking trough behind a three columned portico while to the south it served as a small rectangular mosque (the remains of a mihrab have been found at the site). One significant feature of the khan is an inscription carved into a lintel verifying the date and the commission of the site under Hisham. Executed in the ancient Roman tradition, this inscription would have been composed of bronze castings slightly indented into the stone and secured with metal pegs.
Almost 30 meters north of the palace, the bathhouse is constructed of stone. It consists of a heated marble area, an unheated area covered with plaster to mimic marble, and two service sections. It features barrel-vaulted rooms and a lateral heating system.
Sources: 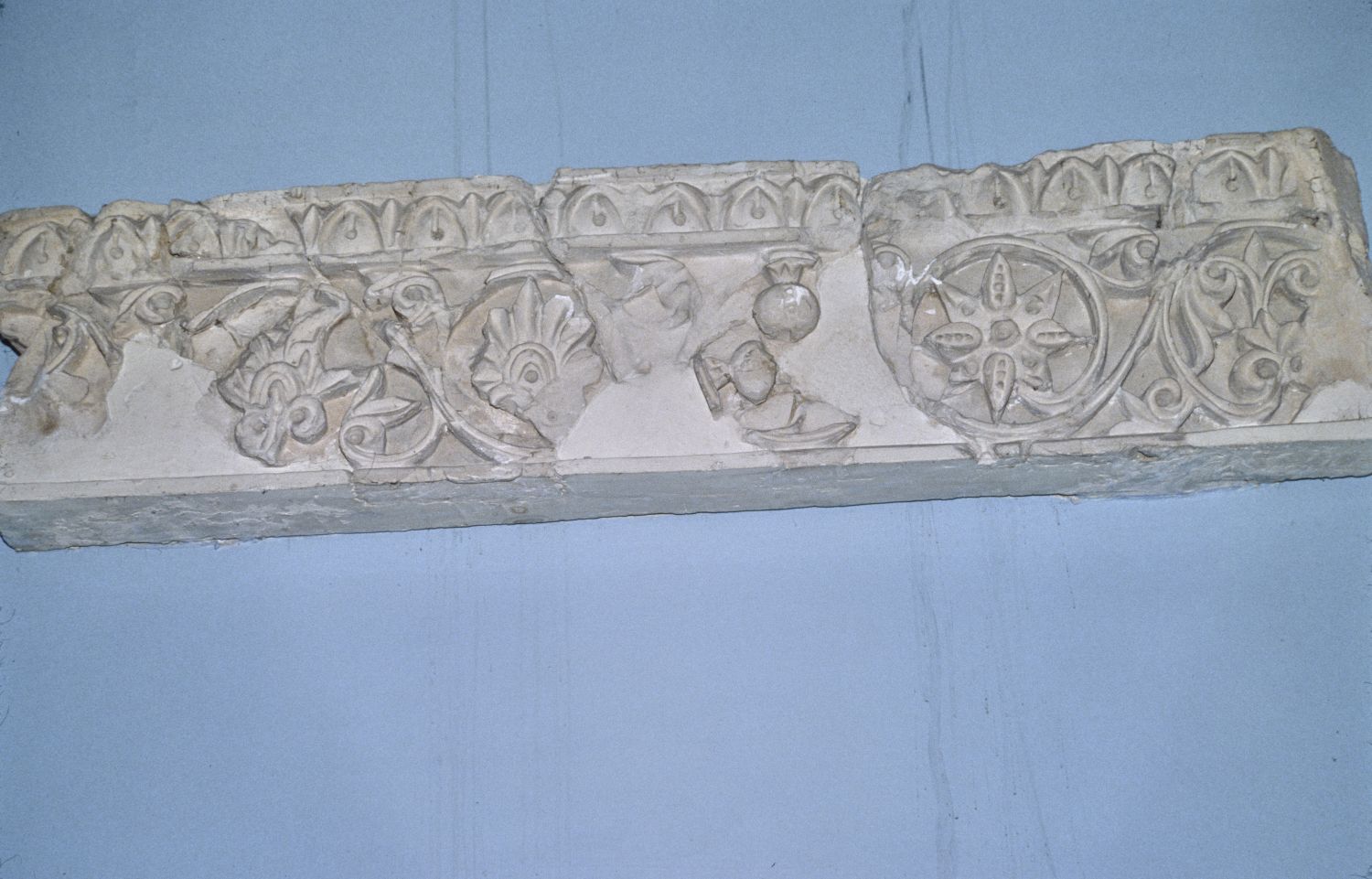