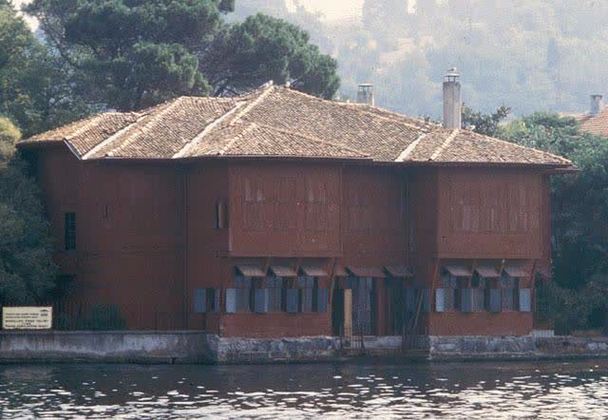 Share
The Sadullah Pasa Seaside Mansion was built towards the end of the 18th century on the Anatolian coast of the Bosphorus, bordering the Havuzbasi creek in Çengelköy. Its first known owner is Mehmed Aga, who served the chief officer (darüssaade agasi) of the Ottoman palace under Abdülhamid I (1774-1789). Sadullah Pasa bought the shares of the other inheritors to become the sole owner of the mansion in 1872.

The compound consisted of two separate mansions housing the men's quarters (selamlik) and the private family quarters (haremlik) built along the water's edge, separated by a wall, and a series of small accessory buildings including a boathouse, baths and kitchens. The buildings were surrounded by cultivated gardens and orchards, which extended landward.

The Sadullah Pasa family lived in the compound until 1917. The men's quarters, a single story building to the north of the private quarters, was demolished at the beginning of the 20th century. The remaining mansion was restored in 1947 by architects Turgut Cansever and Cahide Tamer. In 1977, the Foundation for the Preservation of Turkish Monuments and Environment (TAÇ - Türkiye Anit Çevre Turizm Degerlerini Koruma Vakfi) bought and restored the mansion under the direction of Sedad Hakki Eldem. The restoration remained loyal to the original plan except on the north side where the mansion was connected to the men's quarters and the southern wing, which contained the kitchens and service areas. The architects cleared the remains of these derelict structures and refashioned the northern façade of the mansion to match the southern one; producing, in result, a symmetrical floor plan not found in the original. Most recently, the mansion was restored under the direction of architect F. Feyza Cansever between 1995-1997.

Placed longitudinally along the waterside on the north-south axis, the mansion has a traditional Turkish plan known as the central hall (merkezi sofali) type on two floors. Four entrances, one at the center of each side, lead into a rectangular central hall at the ground floor that has two rooms at its four beveled corners. The north and south entrances open into enclosed stairways, and the western entrance gives out to the dock. The scale of the mansion is relatively small; the central hall measures 8 by 11 meters.

This plan is repeated on the second floor, except for the shape of the central hall, which becomes elliptical. The upper rooms are also slightly larger; they project beyond the frame carried on angled consoles on the exterior. Crowned with a shallow ribbed vault, the oval hall of the upper floor is extended by rectangular iwans (eyvan) to the west and east, providing views of the Bosphorus and the gardens respectively. Its ribbed structure and decoration is likened to a tent by scholars, who trace the evolution of this form to the domed tent (otag), which in Central Asian tradition was raised for festive occasions.

The painted decoration of the walls, dating from the late 18th and early 19th centuries, was revealed when the wallpaper was removed during the 1947 restoration. The rooms are all decorated individually with motifs taken equally from the classical Ottoman and baroque traditions. Among depictions of flowers, fruits and vegetation adorning the rooms on the second floor are landscape renderings that show contemporary sites such as the Topkapi Palace and the Serefabad Seaside Palace. The room ceilings have plaster molding with varied patterns, the more elaborate of which are on the second floor.

Foundation for the Preservation of Turkish Monuments and Environment. http://www.tacvakfi.org.tr/. [Accessed February 15, 2007]